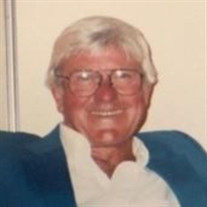 Howard Jay Geerlings, 86, passed away September 28, 2020. He was born August 25, 1934, in Zeeland, Michigan, to Alvin and Dorothy Geerlings. He was preceded in death by his daughter, Cathy in 2015, and sister Marilyn Kok. He is survived by his wife, Joan (NagelKerk), son; Tom Geerlings (Lisa) grandchildren, Thomas, Jennifer, and Matthew, step-children Scott Cook and Christy Siegel, step-grand children Rachael and Nicholas Siegel. Also, surviving are his brother, Ed and Mary Jane Geerlings, Lee and Darlene Soncrant, Cher Little. In addition, Joan’s sister, Nancy and Al Walters and sister-in-law Micky NagelKerk (Jack), and brother, Tom NagelKerk (Susan). Howard graduated from Zeeland High School. He taught history at Rogers High School in Wyoming and was the Head Basketball Coach for 16 years. He graduated from Central Michigan University affiliated with the Delta Sigma Phi Fraternity and was a faithful CMU football fan. He was President of the Wyoming Jaycees, and In 1968 became one of the owners of Ramblewood Apartments as a Manager for 13 years. After early retirement in 1981, he moved to Long Lake near Traverse City. He enjoyed his time as Chairman of Zoning Board of Appeals at Long Lake Township for a number of years. Howard enjoyed carving wild birds as a Master Carver and he and Joan spent their winters in Bonita Springs, Florida, enjoying time at Pelican Landing with friends. Howard was known to have fun times with friends and enjoyed bringing people together. He especially enjoyed spending time at the lake with family, grandkids, neighbors, and friends- his Labor Day get togethers were always a highlight. A Memoriam contribution can be made to: Long Lake Township, 8870 North Long Lake Road, Traverse City, MI 49685 Attn: Timbers Recreation Area (old Girl Scout Camp on Long Lake) The family is being cared for by the Reynolds-Jonkhoff Funeral Home.

Howard Jay Geerlings, 86, passed away September 28, 2020. He was born August 25, 1934, in Zeeland, Michigan, to Alvin and Dorothy Geerlings. He was preceded in death by his daughter, Cathy in 2015, and sister Marilyn Kok. He is survived... View Obituary & Service Information

The family of Howard Jay Geerlings created this Life Tributes page to make it easy to share your memories.