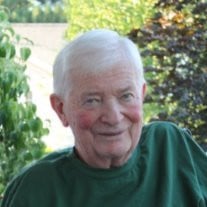 Dr. Ian Kenneth Morrison, 73, was surrounded by his loving family at Munson Medical Center as he peacefully went home to be with his Savior, Wednesday, March 27, 2013. He was born to the late John and Leone (Smith) Morrison on August 5, 1939 in Barrie, Ontario. Ian graduated from Barrie Collegiate High School in 1958 and received a Bachelors and Masters of Science in Forestry in 1964. He went on to receive a PhD in Forestry from University of Toronto in 1968. He married Donna Elizabeth Billings on July 31, 1969 in Toronto. They raised their two daughters in Sault Ste., Marie, Ontario before relocating to Traverse City, Michigan in 2005. Ian was a Forest Soils Research Scientist and devoted 35 years of service to the Great Lakes Research Center in Sault Ste.Marie, Ontario. He was the author of more than 100 published research papers within his profession. Ian was honored with many awards over the course of his career including the Forestry Canada Merit Award and the J. A. Bothwell Award. He often would state "I never worked a day in my life", as he so loved his profession. Ian was an active member of Redeemer Presbyterian Church in Traverse City and a member of the National Forest Association. In his high school years he played the tuba in the award winning Barrie Collegiate band. He travelled all over Europe with the band, giving concerts in a variety of cities. He was a Queen's Scout and made the cover of the Maclean's Magazine when he was only 16. He was an avid photographer, he loved to be outdoors, travel, read, and do woodworking. He enjoyed spending time at his cottage on St. Joseph's Island. He was a devoted husband, father, and grandfather. Ian nobly and courageously dealt with ankylosing spondylitis since the age of 18 until his passing. With all of his health issues, he never complained. He was a kind, gentle, caring man who had a great sense of humor. Ian is survived by his wife of 43 years, Donna Elizabeth Morrison; two daughters: Allison (Chris) Nicolson of Duluth, MN and Christina (Martin) Korson of Sault Ste. Marie, MI. He is also survived by five grandchildren: Kaitlin, Benjamin, and Aaron Nicolson, Madeline and Ella Korson. His youngest granddaughter was named Ella Morrison Korson after her grandpa. He is preceded in death by his sister Patricia Feltis and survived by many nieces and nephews. In lieu of flowers, the family is requesting that donations be made to Redeemer Presbyterian Church, 402 W. Ninth St., Traverse City, MI 49684 or to Munson Healthcare Regional Foundation, 210 Beaumont St., Traverse City, MI 49684 or online at www.munsonhealthcare.org/foundation. Visitation for Ian will take place at 10 a.m. Saturday, March 30 at Redeemer Presbyterian Church, Traverse City, with the funeral service beginning at 11 a.m., also at the church. The Rev. Dan Millward will officiate. Burial will be in Grand Traverse Memorial Gardens. Please share your memories, thoughts and photos of Ian with his family by way of his online guestbook at www.reynolds-jonkhoff.com. The family is being served by Reynolds-Jonkhoff Funeral Home and Cremation Services, Traverse City, MI.

Dr. Ian Kenneth Morrison, 73, was surrounded by his loving family at Munson Medical Center as he peacefully went home to be with his Savior, Wednesday, March 27, 2013. He was born to the late John and Leone (Smith) Morrison on August 5, 1939... View Obituary & Service Information

The family of Dr. Ian Kenneth Morrison created this Life Tributes page to make it easy to share your memories.

Dr. Ian Kenneth Morrison, 73, was surrounded by his loving family...