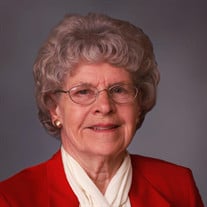 Ida M. Tompkins, 86, passed away on Monday, July 15, 2019 from complications of Parkinsons disease at Bay Ridge Assisted Living Center in the loving care of her family and her devoted caregivers. Ida was born on October 18, 1932 at home in Greilickville, on the southern shore of Cedar Lake. She was the first child of James W. and Gladys A. (Lemcool) Hill. She married Jim Tompkins on December 12, 1951 at the old First Congregational Church in Traverse City on Washington Street. Ida grew up in Greilickville and attended Norris School through the seventh grade. She graduated from Traverse City Central High School in the Class of 1950. Ida’s long-time career with the Traverse City Area Public Schools began when she accepted a part time position in the business office two months prior to her graduation. After 44 years and ten different job titles, she retired from TCAPS in the summer of 1994 as the Assistant Superintendent of Business & Finance. Upon her retirement, the TCAPS central administration building was named in her honor. Ida’s dedication to the school district continued. In June 1995 she ran for a four-year seat on the TCAPS School Board and was overwhelmingly elected when she received the highest number of votes cast in this school district up to that time. In 2007, Ida and Jim were inducted into the Traverse City Central High School Hall of Fame. They were the first couple to earn that honor. Following her retirement in 1994, Ida remained visible throughout the community as a volunteer, performing such duties as helping prepare the Grand Traverse Heritage Center for dedication, selling tickets to the Festival of Trains, and working on various political and millage campaigns. At her time of death she was a member of the Michigan Association of Retired School Personnel, Korean War Veterans Association Ladies Auxiliary, American Legion Bowen-Holliday Post 35 Auxiliary, and for many years before that, the Michigan Association of School Business Officials. Ida and her husband Jim were benefactors of many local charities and organizations over the years. Their endowment funds at the Grand Traverse Regional Community Foundation now annually support local youth causes and provide scholarships to graduates of Traverse City Area Public Schools. Surviving Ida is her beloved daughter Mary Ann and her husband George Galic of Traverse City; her sister Patricia Hill (Peter) Tompkins of Amarillo, Texas; her nephew John (Barbara) Tompkins of Bangor, Pennsylvania; and her nephew David (Sherri) Tompkins of Roswell, New Mexico. She was preceded in death by her husband Jim and her parents James W. “Bill” Hill and Gladys (Lemcool) Hill. Ida’s family would like to express their sincere appreciation to Bay Ridge Assisted Living Center for all the care and attention they have given Ida for the past five years. Hospice of Michigan provided skillful, compassionate care which greatly eased Ida’s journey into Heaven. Kyle Hamilton, MSPT, helped Ida be the best she could be in spite of the challenges of her Parkinsons disease. We will be eternally grateful to each and every one. Friends may call at the Reynolds-Jonkhoff Funeral Home from 6:00-8:00PM on Friday, July 19, 2019. A service celebrating Ida’s life will be held at Reynolds-Jonkhoff Funeral Home on Saturday, July 20 at 3:00PM. Pastor Daniel LeCouteur of Family of Faith Christian Church will officiate. Burial will be in Grand Traverse Memorial Gardens. In remembrance, Ida asked that memorial contributions be made to the building fund for the new Traverse City Senior Center. Checks should be made payable to “City of Traverse City”, with the memo line directing donations to the “TC Senior Center building fund, in memory of Jim & Ida Tompkins”. Reynolds-Jonkhoff Funeral Home and Cremation Services is serving the family.

Ida M. Tompkins, 86, passed away on Monday, July 15, 2019 from complications of Parkinsons disease at Bay Ridge Assisted Living Center in the loving care of her family and her devoted caregivers. Ida was born on October 18, 1932 at home in... View Obituary & Service Information

The family of Ida M. Tompkins created this Life Tributes page to make it easy to share your memories.