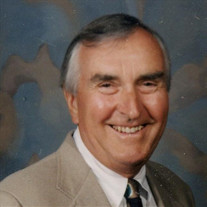 ** PLEASE NOTE: The Memorial Service for Ted may be viewed live via webcast. Log onto www.rjfh.tv, click on Ted's photo which will connect you to the webcast. This should be done approximately one half hour prior to the service and until the time the service begins. Iley "Ted" Nance, 80, of Traverse City, passed away Friday, August 14, 2015. He was born on August 23, 1934 in Detroit, the son of the late Iley Sr. and Elizabeth "Betty" Nance. Ted grew up in Dearborn and graduated from Dearborn High School in 1952. He attended the University of Houston and graduated with a bachelor's degree in journalism. Following a year as a general assignment reporter for the Houston Chronicle, Ted returned to the University to serve as Assistant Sports Information Director, a post he held for three years before he became the school's Sports Information Director in 1960. From 1960 until 1979 Ted promoted and chronicled some of the greatest moments in UH sports history such as 13 NCAA championships in golf, two NCAA Final Four appearances, and Houston's first two Cotton Bowl appearances. In 1983, Ted became the executive Director of the Bluebonnet Bowl. In 1988, He returned home to his alma mater as the Sports Information Director and good fortune followed him, including one of his greatest joys, assisting the Cougar quarterback win the Heisman Trophy in 1989. Ted retired in 1994 and ended his 33 year career with University of Houston. During that time he helped to nurture the school and it's athletic image from humble beginnings to national prominence. In 1983 Ted married the love of his life, Diann. Formerly acquainted as children, they re-met at their 30th high school reunion and were married the following year. They enjoyed 32 years of a blessed and happy life together. Every day Ted's mission was to bring joy and laughter to Diann's life. Family was the most important part of Ted's life. He took endless pleasure in spending time with his children and grandchildren. Ted and Diann's family include children Morgan (Linda), Tom (Cindy), Neil, Mary (Paul), and John. Beloved grandchildren are Jason, Joshua, Ryan, Haley, Jack, Tess and Natalie. Ted and Diann loved dining out, listening to jazz and traveling, and took many memorable family trips to various locations around the world. He was forever a kid at heart with a tremendous zest for life and endless energy. Ted was always ready with good stories, games and practical jokes to the endless delight of his grandkids. To them, there was never any doubt he was the best grandfather in the world. Ted will be so very missed every day. He was a pure soul that God placed upon this earth to make others happy. He was giving, kind, loving and respected by everyone he met. Visitation for Ted will begin at 12:30 P.M. (Eastern) (11:30 Central) Wednesday August 19 at The Reynolds-Jonkhoff Funeral Home, 305 Sixth St., Traverse City followed by the memorial service at 2:00 PM (Eastern) (1:00 PM Central) For those that cannot attend, the service can be viewed via a live webcast by logging in to www.rjfh.tv and clicking on Ted's photo at least 15 minutes prior to the service. Following the service, a luncheon will be held at the Top of the Park at the Park Place Hotel. In lieu of flowers, memorial contributions in Ted's name may be directed to The Father Fred Foundation, P. O. Box 2260, Traverse City, MI 49685 or online at www.fatherfredfoundation.com. Please visit www.reynolds-jonkhoff.com to sign Ted's online guest book and to share your favorite memory or photo of Ted with his family. The family is being cared for by Reynolds-Jonkhoff Funeral Home and Cremation Services.

** PLEASE NOTE: The Memorial Service for Ted may be viewed live via webcast. Log onto www.rjfh.tv, click on Ted's photo which will connect you to the webcast. This should be done approximately one half hour prior to the service and until... View Obituary & Service Information

The family of Iley G. "Ted" Nance created this Life Tributes page to make it easy to share your memories.

** PLEASE NOTE: The Memorial Service for Ted may be viewed live...