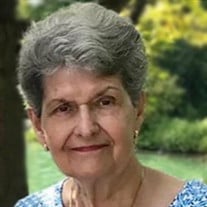 Ilona Bartha, age 84, passed away in Traverse City on November 30, 2020 after a brief illness. She was born Ilona Asbóth on November 4, 1936 in Kaposvár, Hungary. On July 5, 1958 she and her beloved husband, Charles Bartha were married in Detroit. Ilona (Hungarian for ‘Helen’) and Charles were inseparable until his passing in December 2017, just shy of 60 happy years of marriage. During her childhood, Ilona and her family relocated several times as a result of World War II. She was raised in large and small cities throughout Hungary, and after the war was temporarily resettled in Eschenau, Germany. In 1951, she and her family emigrated to the United States and originally settled with a sponsor family in Lorain, OH. Later the Asboth family moved to Cleveland, where they joined a large Hungarian community and finally settled in Detroit. Always proud of her heritage, Ilona officially became a U.S. citizen in 1958 at age 21. Ilona met Charles in Delray, then a Hungarian enclave in Detroit. The first time they saw each other, Charles was volunteering to paint the fence of the local Lutheran church, where they were eventually married. They moved first to Rock Island, IL where Charles, a veteran of both the Hungarian (WWII) and US Military (Korea), worked as an analyst for the US Military. Charles was transferred to Battle Creek, MI where he, and Ilona in later years, worked at the Federal Center for various military branch divisions situated in the city. Ilona was for many years an administrative assistant. Ilona poured all her love into caring for family and close friends year round, but especially during the holiday season. She was an accomplished cook, baker and artist, and volunteered for the American Red Cross in the Battle Creek community for several years. Ilona was an elegant, kind and gentle person who enjoyed being with her husband most of all. Together they traveled the world, making several European trips to visit family and explored the United States together with friends. Upon her husband’s death, Ilona moved to Traverse City. She made many friends in the Bay Ridge community and enjoyed a beautiful view of the Grand Traverse Bay from her balcony. Ilona is survived by her son, Charles A. Bartha of Northville, MI, and his wife Karen (Brissette) Bartha; her daughter, Suzanne (Bartha) VanderKlipp of Traverse City, MI, and her husband Mark VanderKlipp, and four grandchildren: Clara Bartha, Regan Bartha, Alex VanderKlipp, and Charlie VanderKlipp; her brother Julius Asboth and his wife Joan of Alexandria, VA. Cremation has taken place, and Ilona and Charles will be interred in the National Cemetery at Fort Custer in Battle Creek. In lieu of flowers, memorial contributions in Ilona’s memory may be directed to the American Red Cross - Battle Creek Chapter, 111 E Michigan Avenue, Battle Creek, MI 49014.

Ilona Bartha, age 84, passed away in Traverse City on November 30, 2020 after a brief illness. She was born Ilona Asbóth on November 4, 1936 in Kaposvár, Hungary. On July 5, 1958 she and her beloved husband, Charles Bartha were married in Detroit.... View Obituary & Service Information

The family of Ilona Bartha created this Life Tributes page to make it easy to share your memories.

Ilona Bartha, age 84, passed away in Traverse City on November...