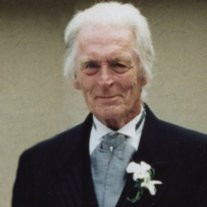 Ivan L. Cooper, 87, passed away on the morning of Tuesday April 30, 2013, at his home, surrounded by family. Although a long time Traverse City resident, Ivan was born in Newcastle under Lyme in the United Kingdom. The younger of two sons of the late John "Jack" and Ann Eliza (nee Walker) Cooper, Ivan grew up in the Midlands and attended Christchurch College, Oxford University before going on to serve in the Royal Air Force as a navigator, during World War II. After the war, Ivan returned to his studies, this time the University of Liverpool, where he earned a degree in Architecture and entered into what was to be a sixty four year marriage with the love of his life, Peggy Reneta Murray Hinett. With Peggy, Ivan had three children, Susan, Ella and Olivia, all current residents of Traverse City. Ivan was a brilliant and talented architect and it was his skill at this profession that earned him a visa and permanent residency in the United States. In 1967 he joined Kramer, Hirsch and Carchidi, AIA, Architects, in Trenton NJ and soon parlayed the experience he had gained at Keele University in England into the design of, not one, but two award-winning colleges in New Jersey - Burlington County College and Gloucester County College. But Ivan did not restrict his talent merely to educational facilities. He leaves behind a body of work including schools, hospitals, postal facilities, even prisons. After retiring from architecture, Ivan joined wife Peggy and helped establish and run P.C. Research Services, a small but important company which provided the data that has helped many of this Nation’s leading non-profit organizations to achieve their fundraising goals. He also served the Grand Traverse region for many years as a member of S.C.O.R.E., the Service Corps of Retired Executives, helping another generation to found businesses in the area. An elegant, distinguished gentleman, indeed a true Renaissance man, Ivan turned his hand, in his spare time, to painting, writing poetry to his beloved wife and to creating a unique home and garden. He had a passion for language and was often to be found, book in hand, studying the derivation of words and phrases. He learned enough Russian to be able to converse with one daughter and remembered enough German to become a competent conversationalist with another. And although he never quite managed the intricacies of botanical Latin, or the requirements of those plants to which it gives names, he was ever happy to sculpt the ground around his home aboard a bulldozer or skid-steer - wearing a suit as he did so! His garden remains a living legacy to that passion… In view of that, a memorial ceremony and celebration of his life and accomplishments will be delayed to mid-summer, to be held in that garden. The family also request that in lieu of flowers, donations be sent in his name to his favored charity, The Wounded Warrior Project. He was preceded in death by his parents, brother, Jack, and grandchild Lauren Mari Lagina. In addition to his wife Peggy, he is survived by daughters, Susan Cooper, Ella Cooper-Froehlich and M. Olivia Lagina, son-in-law, Martin G. Lagina, grandchildren, Alexander Holte Lagina and Madeline Mari Lagina, all of Traverse City, by his sister-in-law Joan Cooper of Great Britain and by nephews in England, Australia and North Carolina, all of whom will hold and cherish his memory.

Ivan L. Cooper, 87, passed away on the morning of Tuesday April 30, 2013, at his home, surrounded by family. Although a long time Traverse City resident, Ivan was born in Newcastle under Lyme in the United Kingdom. The younger of two sons... View Obituary & Service Information

The family of Ivan Cooper created this Life Tributes page to make it easy to share your memories.

Ivan L. Cooper, 87, passed away on the morning of Tuesday April...