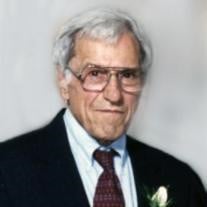 J. Paul Racine, 93, died January 4, 2013 at his home in Traverse City. Paul was born on May 31, 1919 to the late Ida (Charbonneau) and Arthur Remy Racine in Fall River, Massachusetts. Paul graduated from Harvard University in 1941, and later earned his Master’s degree in Social Work from Boston University. He served our country in Europe and Africa in World War II as a member of the U.S. Army from 1941 until 1945, and was honorably discharged at the rank of Captain. He married the former Lorraine G. Nolet on June 5, 1948 at Notre Dame Catholic Church in Worcester, Mass. Paul was a Social Worker with the Veteran’s Administration, and was the Director of Social Services at Metropolitan Hospital in Detroit for many years, retiring in 1981. Paul is survived by his wife Lorraine, his sons, John (Linda) of Traverse City, David (Barbara) of Auburn Hills, Stephen of Indian Harbour Beach, FL and Peter (Chieko) of Plymouth. Also surviving are his grandchildren, Roger, Jean, Christine, David, Annie, Michael and Jessica, and his 9 great grandchildren. Paul was preceded in death by his parents and his brother, Arthur. Visitation for Paul will take place from 4 until 8 p.m. Tuesday, Jan. 8 at the Reynolds-Jonkhoff Funeral Home, with a 15 minute scripture service at 7 p.m. The Mass of Christian Burial will be celebrated at 11 a.m. Wednesday, Jan. 9 at St. Francis Catholic Church where Paul was a member. The Reverend Fr. Ken Stachnik will preside. Memorial contributions may be directed to Munson Hospice, c/o Munson Regional Healthcare Foundation, 210 Beaumont Place, Traverse City, MI 49684 (online at www.munsonhealthcare.org), or to the St. Francis Catholic Church Food Pantry. Please share your thoughts and memories of Paul with his family by way of his online guest book at www.reynolds-jonkhoff.com. The family is being served by Reynolds-Jonkhoff Funeral Home.

J. Paul Racine, 93, died January 4, 2013 at his home in Traverse City. Paul was born on May 31, 1919 to the late Ida (Charbonneau) and Arthur Remy Racine in Fall River, Massachusetts. Paul graduated from Harvard University in 1941, and later... View Obituary & Service Information

The family of J. Paul Racine created this Life Tributes page to make it easy to share your memories.