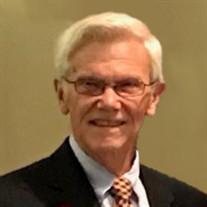 Jack E. Boynton, 74, of Traverse City, fondly known as Toad, passed away September 30, 2021 at Cherry Hill Haven. Jack was born on December 2, 1946 in Detroit to the late Robert Lyman and Harriet Victoria (Wilson) Boynton. Jack met his future bride while they both were attending Albion College. He graduated in 1968 and later that summer he married the former Joanie Elaine Mansfield in Clarkston. During his first year of Law School at the University of Michigan, he was drafted into the Army and served from 1969 to 1971 during the Vietnam Conflict. He then completed his studies and earned his Juris Doctorate in 1973. He and Joanie then moved to Traverse City where he began his law practice that spanned 48 years. Jack served as an Ambassador and Band Host for the Cherry Festival, was a member of the Traverse City Commission and was mayor in 1994. In his free time he enjoyed boating, camping and going for walks in nature with his dog Dudley. He and Joanie were at all of their kids activities, whether they were performing, playing or coaching and that tradition of support only grew when they were promoted to grandparents. He also liked to cheer for the U of M football team and attended many games with his family. He loved a good chocolate malt and could make a perfect batch of popcorn. Unbeknownst to many he was also a professional model for Oldsmobile for one whole day. Jack will be remembered for his loyalty and love for family. Jack was preceded in death by his parents, father-in-law William Mansfield and daughter-in-law Kate. Jack is survived by his wife of 53 years, Joanie; children Robert, James, Wendy (Gavin) Richmond, Marcus (Megan Peace) , and Jared (Samantha); grandchildren Rachael (Josh) Brown, Rebecca, Lola, Geordie, Ruby, Will, Gus, Laney, Louis, Tyne and Francesca; and siblings Sue (Mike) Abbott and Thomas L. (Joyce) Boynton. Visitation for friends and family will be held on Thursday, October 7, 2021 from 4:00 to 7:00 pm at the Gardens at Reynolds Jonkhoff Funeral Home. The funeral will be held outside on Friday, October 8, 2021 at 3:00 pm with visitation beginning at 2:00 pm also at the funeral home. Memorial contributions in his honor may be directed to the Alzheimer’s Association.

The family of Jack E. Boynton created this Life Tributes page to make it easy to share your memories.