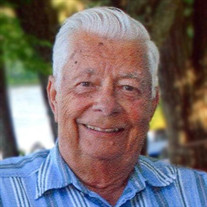 Jack George Bremer, 91, of Traverse City, Michigan passed away peacefully surrounded by his family on Monday, October 12, 2020 at his home. Jack was born on July 28, 1929 in Traverse City to Nellie (Livingston) and George Bremer. He married the love of his life, Mary Jamison, on November 3, 1947 in Flint, Michigan. He earned his Associates Degree at General Motors Institute and apprenticed at Buick Motor Division from 1948-1951. One of his first tasks was helping manufacture jet engines at Buick during the Korean War. Jack was employed with General Motors as a machine repairman, retiring in 1984 after over 34 years of service. He was a faithful member of Trinity Lutheran Church. He loved to sing in the church choir. Jack and Mary spent over 35 winters in Gulf Shores, Alabama. While there he enjoyed playing volleyball and wallyball and he was a member of the North Winds Barbershop Chorus. Jack was a talented craftsman who could fix anything. In his spare time he enjoyed clock repair and woodworking, making beautiful furniture and other items for family and friends. He also loved teaching and cueing round dancing for many years. Above all, spending time with his family was his greatest joy. Jack is survived by his loving wife of 72 years, Mary, two sons and a daughter, Richard (Paulette) Bremer, David (Marcia) Bremer and Kathy (Edward) Tokarek. Also surviving are seven grandchildren; Kevin (Kendra) Bremer, Tim (Summer) Bremer, Rachel (Bryan) Harris, Kelli DeGood, Michael (Alison) Bremer, Colin Tokarek and Nathan Tokarek as well as 14 great-grandchildren, a sister-in-law, Shirley Dilsworth and many nieces and nephews. He was preceded in death by his two brothers; Herman Bremer and Chuck Bremer. A memorial service honoring Jack will take place at 11:00 a.m., with visitation starting at 10:00 a.m., on Saturday, October 17, 2020 at Trinity Lutheran Church, 1003 S. Maple St, Traverse City, Michigan, 49684. Rev. Michael Goers will officiate. In lieu of flowers, those planning an expression of sympathy may wish to consider a memorial donation to Trinity Lutheran Church and School, 1003 S. Maple St, Traverse City, Michigan, 49684 or Heartland Hospice, 4020 Copper View, suite113, Traverse City, Michigan, 49684. Please feel free to share your thoughts and memories with Jack’s family at his tribute page at www.reynolds-jonkhoff.com. The family is being cared for by the Reynolds-Jonkhoff Funeral Home and Cremation Services.

Jack George Bremer, 91, of Traverse City, Michigan passed away peacefully surrounded by his family on Monday, October 12, 2020 at his home. Jack was born on July 28, 1929 in Traverse City to Nellie (Livingston) and George Bremer. He married... View Obituary & Service Information

The family of Jack George Bremer created this Life Tributes page to make it easy to share your memories.