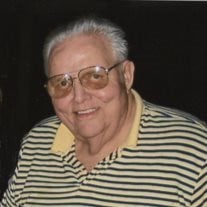 Jack Douglas Fralick, 83, of Traverse City, passed away Friday, January 3, 2014 at Munson Medical Center. Jack was born on Tuesday, December 30, 1930, the son of Samuel D and Constance (Barlow) Fralick in Cheboygan. An insurance salesman, Jack was known for his hard work and "workaholic" attributes. He had lived in Cheboygan, Traverse City, Manistee and Niles before returning to Traverse City in 2004. Jack was a member of Masonic Lodge #283 F & AM in Cheboygan and enjoyed being Santa Claus for his younger children and in his birth town of Cheboygan. He enjoyed traveling in his RV with his wife Phyllis, raising vegetables in his gardens and doing food demonstrations in area stores. He is survived by his daughters, Terrie Jo (Carroll) Cady and Jacqueline (Stan) Delk, all of Traverse City, son Jay (Kathie) Fralick of Lake Leelanau, 9 grandchildren, several great grandchildren and great great grandchildren. Also surviving is his brother Samuel D (Eloise) Fralick, Jr. of Cheboygan. He was preceded in death by his wife Phyllis, his children's mother, Nancy, as well as his parents. The Memorial Service for Jack will begin at 10 a.m. Wed., Jan. 8 at the Reynolds-Jonkhoff Funeral Home in Traverse City. Inurnment will be in Grand Traverse Memorial Gardens. Memorial contributions in Jack's name may be directed to the Grand Travese Pavilions Foundation, 1000 Pavilions Circle, Travese City, MI 49684. Please share your memories and thoughts with Jack's family by way of his online guest book at www.reynolds-jonkhoff.com. The family is being served by Reynolds-Jonkhoff Funeral Home and Cremation

The family of Jack Douglas Fralick created this Life Tributes page to make it easy to share your memories.