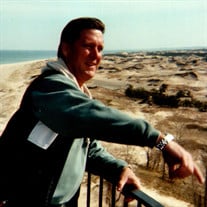 So you think you know Jack? If you think you know Jack, did you really know Jack? Jack Robert Keyes, avid cross country ski pioneer, self-taught naturalist and U.S. Navy submarine service veteran died April 30, 2022 after a fierce six-month battle against cancer. He was surrounded by family and some of his hundreds of friends. A fifth generation native of Traverse City, Jack was born July 11, 1947 to Bob and Patty Keyes. The graduate of Traverse City High School was a master of many disciplines, including graduating the Navy electronics and submarine schools, Northwestern Michigan College, where he pursued ongoing studies, Grand Valley State College and the Water Quality Association certification program. He achieved Eagle Scout with Troop 35 in Traverse City and continued to volunteer in the '70s and '80s Jack lectured on outdoor recreation and development of cross-country skiing in northwest Michigan. A Region 8 Planning Commission Trail Advisor, he helped establish VASA, Tart and Leelanau trails. He facilitated his grandmother donating land at Hickory Hills for Jack's Trail. He was a kayak safety instructor and helped with Cross Country Ski for Light. Jack helped organize the Western Michigan Sierra Club and the Western Michigan Kayaking Association while he was assistant manager at Bill & Paul's Sport Haus in Grand Rapids, where he was top salesman for 14 years. He also instructed on Nordic skiing at clubs, schools and businesses. He lectured at Ball State University and consulted on human endurance research. He initiated and managed sales at Sugar Loaf Resort where he was Nordic director and developed the Nordic program. For 10 years Jack was independent Midwest sales representative responsible for design, development and sales for companies involved in Nordic skis, clothing and related products. Over the decades Jack worked for Traverse City Parks and Recreation as a water safety instructor, lifeguard director and ski patrol director; Twin Lakes 4-H Camp, and Timberlee Ski Area. For 30 years he worked at Munson Hospital in environmental services and patient transport. In 2004 Jack married Winifred (Winnie) White of Traverse City, who survives. The wedding, officiated by The Rev. Dr. Gordon Garthe, was in Peterson Park, Northport. He is survived by a son Travis “T.J.” (Stephanie) and daughter Leah (Kevin Sloan) Meyer, both of Traverse City, nine grandchildren and eight great grandchildren. Jack always described himself as a "storyteller and salesman." He said "to be a good salesman, you have to be a good customer of life." In retirement he and Winnie enjoyed their pontoon boat. And Jack worked with area wineries because he long believed our area holds unique potential to produce world class wines. He loved wine tasting as a hobby and educating people on local wine lore. So, if you know Jack, you know to raise a glass of local wine to toast him. Visitation will be held on Thursday May 5 from 5 to 7 pm at the Reynolds Jonkhoff Funeral Home. The funeral celebrating his life will also take place at the funeral home, on Friday, May 6, 2022 at 11 am, with visitation beginning one hour prior. Jack will receive full military honors from the Cherryland VFW Post #2780. Interment will take place at a later date in Northport. Memorial contributions in his honor may be directed to the Adaptive Sports Programs.

The family of Jack Robert Keyes created this Life Tributes page to make it easy to share your memories.