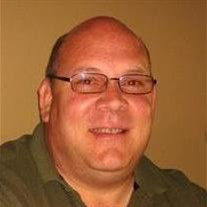 James ‘Jimmy’ Carroll, 51, of Traverse City, passed away unexpectedly in Houston, Texas while visiting family. Jim was born March 17, 1966, in Morley, MI to the late William Grandville Carroll and Annie Mary (Schillace) Carroll. Jim had a huge heart and would go out of his way to help anyone in need. He was always listening to music or whistling while he worked. At work and at home, he always had a jar of peanut butter and a spoon handy. He was the goofball, the mentor, the teacher, the friend, and the hero (though he’d never call himself that). Jim was an excellent example of a “good human” with the unlimited ability to open his heart to others. Even his greeting with a firm handshake or a huge hug was a reminder that you were important to him. He made sure to remind people of how much he loved them, which earned him the nickname “Jimmy Luv.” Because of the impact he has left on his family, the community, and the youth of this area, his death will leave a void for many years to come. Jim was always a memorable figure in his communities. In high school, he played football, basketball, and track and field, served on Student Council, and was Homecoming King his senior year. In Traverse City, he worked for several years at DeWeese Hardware while volunteering with Blair Township Fire Department. He began to focus on his Fire Service career by working part-time at Blair and serving as the Fire Public Educator for Metro and Rural Fire Departments. As Public Educator, he was proudly known as “Fireman Jimmy” to the many elementary school students who loved his visits. In 2008, he was chosen to be the first full-time Fire Chief at Blair Township Fire Department. Jim is survived and missed dearly by his partner of 10 years Sara Kopriva, his daughter Heather Carroll, his step daughter Shara (Derek) Ekins, his grandchildren Wyatt and Owen Ekins, his brothers and sisters; Steve Carroll (Cathy McLean), Patsy (Mike) Westra, Barb Carroll and Bruce (Mary) Carroll. He is also survived and missed dearly by his nephew, Andy (Amanda) Carroll, niece Dana (Russell) Elder, and his Fire Service brothers and sisters. He will also be missed dearly by his many pets, especially Harvey, Girly, and the chickens. He is preceded in death by both his parents, uncles Joseph Schillace and Felix Schillace, and aunt Jennie Ciampa. Those considering an expression of sympathy in Jim’s honor may do so by a donation of any kind to Michigan Blood or your local elementary school. A memorial service to honor and celebrate Jim’s life will take place on Tuesday September 5, 2017 at 3:00pm at the Reynolds-Jonkhoff Funeral Home; 305 Sixth Street, Traverse City, MI 49684 with visitation one hour prior. A reception will follow at the Blair Fire Station, to continue sharing memories of our dear friend.2121 County Road 633, Grawn, MI 49637. Parking is made available at Thirlby Field with shuttles running to and from the funeral home. For those wishing to attend accommodations have been made to see and hear the service. Please visit www.reynolds-jonkhoff.com to share your condolences with the family. The family is being cared for by the Reynolds-Jonkhoff Funeral Home and Cremation Services.

The family of James 'Jim' Carroll created this Life Tributes page to make it easy to share your memories.