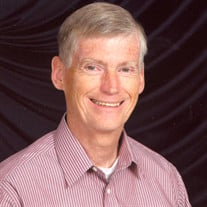 James (Jim) Russell Cook, age 75, of Traverse City, MI, died December 3, 2018 at the Munson Hospice House in Traverse City. Jim was born to Lois and Russell Cook in Elyria, Ohio on December 18, 1942, the second child after his brother Don. Because his father held a position at the United Nations in Geneva, Switzerland, many of Jim’s formative years were spent in Geneva, where he graduated from the International School of Geneva. The family’s biannual visits to his hometown were sometimes marked by articles in the local paper, because international travel was an unusual occurrence at that time and place. He married Ann Ivers in Delaware, Ohio, in 1968. They lived in central Ohio, where Jim worked in administration at the Ohio State University. Jim also coached soccer in Worthington, Ohio for his older 2 children, Terry and Kristen. In the summer of 1987, the Cooks (now including the youngest child, Jon) moved to Grawn, Michigan. In Traverse City, Jim worked with the TBays soccer association, where he helped to establish the girls’ program, coached, and contributed many hours to leading the referee program. More recently, he worked for Munson Health Care, then traveled the country working as a software consultant in medical credentialing. For the past 18 years Jim was a very active member and leader of the Unitarian Universalist Congregation of Grand Traverse (UUCGT). He enjoyed the companionship of and traveling with his dear and loving friend, Kay Sturgeon, especially to visit his children, Terry Cook (who lives with her husband John Gosink in Seattle, Washington), Kristen Bennett (who lives with her husband Michael Bennett in Clarkston, Michigan), and Jonathan Cook (who lives with his wife Regina (Torqueza) Cook in Chicago, Illinois), and 3 wonderful grandsons (Ryan James and Devin Michael Bennett, and James Vincent Cook). Jim also enjoyed photography, kayaking, hiking, and reading. He loved movies and was a big fan of the Traverse City Film Festival. Jim is survived by his sister, Cascade Cook, of California. Jim’s kindness and decency will be missed by all those who knew and loved him. A Celebration of James life will be held at 3:30 pm on Saturday, May 11, 2019 at the Unitarian Universalist Church. In lieu of flowers, donations can be made to Munson Hospice House, 450 Brook Street, Traverse City, MI 49684, the Grand Traverse Regional Land Conservancy, 3860 N Long Lake Road, #D, Traverse City, MI 49684, or the Unitarian Universalist Congregation Endowment Fund, 6726 Center Road, Traverse City, MI 49686.

The family of James Cook created this Life Tributes page to make it easy to share your memories.