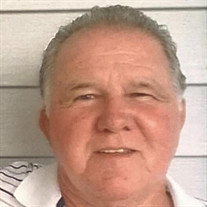 James G. Cowley, 78, of Traverse City, entered into eternal life at Munson Medical Center, December 1, 2021, with his wife Diane and daughter Marcie holding his hand. He died from complications of COVID-19 after fighting valiantly for two weeks. Jim was born on April 6, 1943, son to Gerard J. and N. Lorraine (Henson) Cowley in Champaign, IL, who precede Jim in death. Jim was also predeceased by his nephew Kevin Patton and son-in-law Ken Williams. He is survived by his loving wife of 53 years, Diane (Wilson) Cowley; dear daughter Marcie Cowley; son James Jr. (Robyn Shelley); beautiful granddaughters Katie Williams, Sarah Cowley, Lauren Cowley, precious great-granddaughter, Georgina Houston; beloved sisters Fonda (John) Webster and Maureen Goddard; nephew Kent Patton and niece Tracy (Dave) Kinney. Other survivors are the Wilson clan: sisters-in-law Muriel Avery, Cheryl Wilson, Jackie Fredenburg, Nancy Wilson, Sandra (Ken) Sleder, Jennifer (Wayne) Simmons and special best friends, sister-in-law Gloria (Dennis) Burke. He is also survived by numerous nieces and nephews and his Cowley cousins who were very special to him. We can’t forget his three furry friends, puppy Champ (what were we thinking?!) and two kitties. Jim was proud of his service to his country in the US Air Force. He served for 4 years with his last duty station at Empire Air Force Base, Empire, MI. where he made many lifelong friends. Jim worked for over 30 years for the telephone company, retiring in 1994. He was a member of the CWA, Elks Club and American Legion. He loved all sports, as a participant and spectator. He was a loyal Spartan fan but would also support the Wolverines, and on occasion, the Ohio Buckeyes! Jim will be remembered for his love of family, sense of humor, his faithfulness to his God and church, his generosity, and so many more attributes. A celebration of life will be held at a later date. The family asks that you consider the First Baptist Church of Traverse City or Cherryland Humane Society if you choose a memorial. Those wishing to share memories and condolences may do so by visiting James’ tribute page, www.reynolds-jonkhoff.com

The family of James Cowley created this Life Tributes page to make it easy to share your memories.