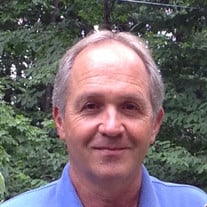 James Michael Depper peacefully left this life on July 27, 2014, surrounded by his loving family. He was born in Detroit on December 14, 1951 to the late William and Joyce Depper. He grew up in Dearborn Heights and his family often vacationed in Elk Rapids. Jim had a zest for life, often remarking that when he wasn't working---he was on vacation! At age 26, he discovered he loved bicycling in beautiful northern Michigan. So in 1977, he worked several jobs in order to move up north, including Gmoser Septic Service in Elk Rapids, NMC Food Service and Brick Wheels. Eventually he settled into the oil and gas industry in sales and service for the next 32 years; in that time he worked for Gray Tool, B&B, Wood Group Pressure Control, Kinnco and Great Lakes Wellhead in Grawn. Many of his customers became his good friends. Jim enjoyed searching out well sites that were off the map, and on the backroads. He always traveled with a bike in the back seat of his pick up truck---ready to explore. He later packed in cross-country skis to enjoy his wintertime passion where ever there was snow. He met and married his love, Sharon MacDonald in 1986. They were blessed with three daughters and lived in Leelanau county for the last 22 years. Together they set off on numerous outdoor adventures, sailing on West Bay and skiing and camping in the upper peninsula and Canada. He was a camera buff, wine enthusiast, mountain biker and avid Lake Superior kayaker. He particularly relished swimming in every Michigan lake he encountered. But the proudest and happiest moments of Jim's life were enjoyed with his beautiful daughters, sharing all his passions with them, and marveling at the precious gift of family and faith. Jim is survived by his wife, Sharon; daughters Natalie, Marielle (Tyler) Larson, and Rachel; brother Tom (Janice); sisters Susan (Bill) Little, Janet (Dave) Wilson, and Mary (Mark) Smith; and many nieces and nephews. Preceded in death by his parents. Visitation will be held on Friday, August 8 from 6-8pm at Peninsula Bible Church, 430 Fair St, near the Civic Center in Traverse City. A memorial will also take place at the church on Saturday, August 9 at 1pm, with friends welcome to visit one hour prior to the service. Memorial contributions may be directed to the Oilfield Christian Fellowship (www.oilfieldchristianfellowship.com) or to the family.

James Michael Depper peacefully left this life on July 27, 2014, surrounded by his loving family. He was born in Detroit on December 14, 1951 to the late William and Joyce Depper. He grew up in Dearborn Heights and his family often vacationed... View Obituary & Service Information

The family of James Michael Depper created this Life Tributes page to make it easy to share your memories.