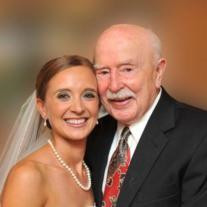 James Edward Dux, 89, of Traverse City died peacefully Sunday, September 2, 2012 at Munson Medical Center in Traverse City under the care of Munson Hospice. Jim was born on Monday, March 12, 1923 to the late Henry and Elsie (Kuss) Dux in Valparaiso, Indiana. On Sunday, December 17, 1950, he married the former Pollyanne Mackenbach in St. Marys, Ohio. Jim served our country during WWII as a member of the U. S. Army Air Corp. He had been a tool and die designer in the auto industry prior to his retirement. Jim and Polly were long time residents of Royal Oak and Ferndale, moving to the Traverse City area in 1994. He was an active member of Feast of Victory Lutheran Church in Acme and was a volunteer for many years at Munson Medical Center. Jim enjoyed meeting old and new friends, using his computer and being "Mr Fix-It" until the end. He was so happy to attend his granddaughter's wedding with his entire family on July 28th in New York. Jim is survived by his wife, Polly; his children, Jeanne (John) Johnston, Maribeth Frincke, John (Abby) Dux and Robert (Kathleen) Dux as well as his grandchildren, Jim, Jason, Jessica, Joe, Stephanie, Justine, Brien, Kaveon, Deonta. He was preceded in death by his granddaughter, Jaime Johnston. Visitation for friends and family will be held from 10:00 AM until 11:00 AM Saturday, Sept. 8 at Feast of Victory Lutheran Church, 4400 Mt.Hope Rd., Acme followed by a Service of Eternity at 11:00 AM, also at the church. Pastor Jim Helman will be officiating. Interment will be in Glen Eden Memorial Park in Livonia. Memorial contributions may be directed to Feast of Victory Lutheran Church, P. O. Box 298, Acme, MI 49610 or to Goodwill Inn, 2943 Keystone Rd. North, Traverse City, MI 49686.

The family of Mr. James E. Dux created this Life Tributes page to make it easy to share your memories.