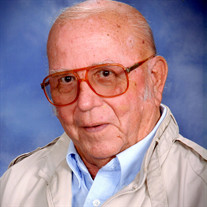 Traverse City - James "Jim" Westley Franklin, age 84, died on Friday, March 16, 2018 at his home on East Bay in the loving care of his family. From his birth in Traverse City, May 11, 1933, to his death, he dedicated his life to his hometown as a fifth generation native. He was a member of the first graduating class of NMC and spent 35 years of service as the City Tax Assessor, continuing on the yearly board of review until his passing. He left home for a few years to proudly serve our country in the Korean War. Upon his return, life refocused on family. Jim and his first wife, Mary, raised five children in their home on State Street. As time went on, his dedication to Traverse City and it's nature only grew. Jim had a natural affinity to lifeguarding on East Bay, ensuring the grandkids never went above the waist, even as teenagers. He lovingly tended to his garden where the weeds were as healthy as the roses. Each spring brought the promise of the annual "Installation of the Dock", an event dreaded by his sons and son-in-law’s, and spent many summer days searching for his ever elusive mooring chain(*if found, please contact Matt). Known as a phenomenal armchair quarterback, he could supervise any football team from the comfort of his home. His athleticism carried over to the bowling alley where he was a dedicated mediocre bowler. He singlehandedly funded public schools through his generous donations at the local BP station to the Michigan Lottery. Staff at his favorite watering hole, The Sail Inn, will miss him and his crisp five dollar bill. The world will miss his creative problem solving skills. He could fix anything from birdfeeders to his innovative restraint systems in his Dodge pickup, aka the coat hanger seat belt. All grandchildren will miss the man that loved them too much to put them down long enough to learn how to walk. Left to remember Jim are his five children; Matt (Kim) Franklin, Kitty (Barney) Ewing, Colleen (Bill) Wilson-Lihou, Tom Franklin, and Meg (Jason) Franklin-Judd. Carrying on his legacy are his thirteen grandchildren; Nick, Joe (Michelle), Collin, Josh, Patrick, Jordan (Kevin), Kyle, Bailey (Zak), Brynne (Zach), Hannah, Lily, and Pilar. As well as his five great-grandchildren; Jamisen, Jasper, Bodhi, Mackenzie, and Miles. One cannot forget to mention the care of his in-laws, nephews, and nieces of the Phillips family. Jim was preceded in death by his beloved wife Joyce, parents, Windsor and Sadie, and eleven siblings. A Celebration of James’s life will take place on Saturday, May 19, 2018 at the Reynolds-Jonkhoff Funeral Home with visitation beginning at 2:00 pm until the time of the service at 3:00 pm. In lieu of flowers memorial contributions may be directed to Munson Hospice, 450 Brook Street, Traverse City, MI 49684 or Northwestern Michigan College, 1701 E Front Street, Traverse City, MI 49686.

Traverse City - James "Jim" Westley Franklin, age 84, died on Friday, March 16, 2018 at his home on East Bay in the loving care of his family. From his birth in Traverse City, May 11, 1933, to his death, he dedicated his life to his hometown... View Obituary & Service Information

The family of James Franklin created this Life Tributes page to make it easy to share your memories.