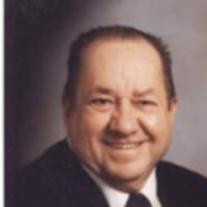 James R. Godfrey, 85, of Traverse City, passed away on Monday, January 14, 2013 at Munson Medical Center. Jim was born on Saturday, October 8, 1927, the son of Frederick Charles David Godfrey and Annie Olive (Lowry) Godfrey. On Saturday, Jan. 7, 1950 in Detroit, he married Janet Regan (who survives him), his loving wife of 63 years. Jim served in the U. S. Merchant Marines from 1944 - 1946 during World War II, in the Atlantic, Pacific, Mediterranean and Middle East war zones, and was also a part of the Philippine Liberation. He was a used car salesman at numerous dealerships in the Detroit area for over 30 years. In 1979, Jim and Janet moved to Traverse City, where he worked for Montogmery Ward until the store closed in the 80's. Then he worked at Carpenter, Inc. until he retired. In retirement, Jim and Janet enjoyed vending at various area festival flea markets for many years, as well as other part-time jobs. He was a lifetime member of the Elks Lodge, a member of the American Legion, and a member of the Traverse City American Military League. While living in the Detroit area, he was a long-time member of Multi-Lakes Conservation Club. Jim loved the outdoors - family camping trips, fishing, mushrooming, golfing, and, of course, hunting season at deer camp with his friends and family. He was also an avid bowler for many years and loved to travel. Playing pinnocle and euchre were also favorite pasttimes. Jim is survived by his loving wife, Janet; and his children, Christine (Carl) DeGrandchamp of Traverse City, Catherine Godfrey of Wixom, Denise (Phillip) Strommel of Lake, James (Robin) Godfrey of Traverse City, Cindy (Steve) Melichar of Traverse City and Steve (Connie) Godfrey of Waterford. Also, 10 grandchildren, 11 great grandchildren, his brother Irving Godfrey of Ocala, FL and his sister, Olive Margaret Laitala of Livonia survive. We will all miss you dearly. He was preceded in death by his parents, his brothers, David, Charles, and Robert and twin grandsons, James and Thomas Bembeneck. According to Jim's wishes, he has been cremated. Visitation will take place from 12:30 until 1:30 p.m. Saturday, Jan. 19 at the Reynolds-Jonkhoff Funeral Home with the Memorial Service beginning at 1:30 p.m., also at the funeral home. Deacon Rene Hoenscheid will officiating and military honors will be provided by the Honor Guard of Cherryland VFW Post 2780. Memorial contributions may be directed to the Cherryland Humane Socciety, 1750 Ahlberg Rd., Traverse City, 49686 or to the Grand Traverse County Commission on Aging, 520 W. Front St., Traverse City, 49684.

The family of James Richard Godfrey created this Life Tributes page to make it easy to share your memories.