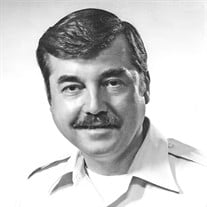 James DeLong Haldaman: born June 25, 1935 in Grand Rapids, MI and died November 23, 2018 in Traverse City with his wife by his side. He answered the call to serve his country from the age of 17, retiring from over 33 years of both active duty and reserve service with the US Navy as a machinist's mate and later photographer on the USS Watts and the USS Intrepid during the Korean Conflict, completing his many years of military service as a combat photographer with the 172nd Tactical Air Support Group and the 110th Fighter Wing after having served in over 20 foreign countries and 30 U.S. states. He was also an expert marksman on the base's pistol team with both branches of the service, earning a number of awards. Upon leaving active military service, he moved his young family to Nashville, TN to be nearer his wife's hometown of Manchester, working as a professional photographer creating beautiful portraits for many of country music's best-known artists before returning to Michigan. Later, he served the citizens of Wyoming, MI for 22-years as an Evidence Technician / Crime Scene Investigator for the Wyoming Police Dept., using his professional photographic and analytical forensic skills to solve a number of complex cases. He enjoyed many collaborative and rewarding relationships with members of the FBI, Secret Service, the MI State Police Crime Lab, and law enforcement professionals throughout the state and country. His photographic skills even attracted the attention of President Ford, who enlisted his expertise to record the dedication of the Ford Presidential Museum in Grand Rapids, serving as the White House's official photographer for this international event. Serving as a radio pastor for his former church in Grand Rapids, he was also on numerous boards, including the MI Heart Association, Kent Metro Identification Association, the Michigan Ontario Identification Association, Michigan Professional Photographers Association, and Opera Grand Rapids, among others. He also taught forensics and evidence preservation techniques at Grand Valley State University and Grand Rapids Community College. Retiring to Traverse City in 1998 with his wife, he volunteered his time as the Asst. Dir. of Photography for the National Cherry Festival, served with the Traverse City Camera Club, and was the communications officer for the Traverse City chapter of the Civil Air Patrol, achieving the rank of Captain. With an endless appetite for knowledge, he attended Michigan State University, Indiana State University, Grand Valley State University, and Macomb and Grand Rapids Community Colleges, graduating from their schools of Criminal Justice, as well as from the FBI's National Academy in Quantico, Virginia. His life goal was not so much to absorb knowledge for its own sake, but to use what he recognized as God-given skills and abilities to make a positive difference in the lives of others. In so doing, he wrote his epitaph on their hearts where it would last forever. He simply lived to be the hands and feet of Jesus, projecting kindness and compassion to others. He was an excellent leather-smith in his spare time, and loved to cook, freely sharing his talents with his family, especially with his and Monica's twin sons in their youth. James is sadly missed by his loving wife of 61 years, Monica June Haldaman of Traverse City; twin sons Steven (Michelle Lauer) of Grand Rapids with a grand-daughter Christine, and Phillip (Shannon) of Elk Rapids, MI with grand-sons Ethan and Hunter; and sister Bonnie Sue Mapes of Byron Center, MI. He was preceded in death by his parents, Edward and Violet Haldaman of Grand Rapids, and a brother, Covell (Ursula) Haldaman of Keiserslautern, Germany. The family wishes to acknowledge with humble gratitude the compassion, care, and professionalism of North Flight EMS paramedics, Munson Medical Center's ER and A-Wing staff, and Traverse Manor care-givers. A visitation will take place Wednesday November 28, 2018 at the Reynolds Jonkhoff Funeral Home from 5pm-7pm. A funeral service will take place Thursday November 29, 2018 also at the funeral home at 11:00am with visitation one hour prior. James' final resting place will be at the Grand Traverse Memorial Gardens with proper military honors. In lieu of flowers, memorials may be directed to the Webber Heart Center at Munson Medical Center of Traverse City. The family is being served by the Reynolds Jonkhoff Funeral Home of Traverse City.

James DeLong Haldaman: born June 25, 1935 in Grand Rapids, MI and died November 23, 2018 in Traverse City with his wife by his side. He answered the call to serve his country from the age of 17, retiring from over 33 years of both active duty... View Obituary & Service Information

The family of James DeLong Haldaman created this Life Tributes page to make it easy to share your memories.