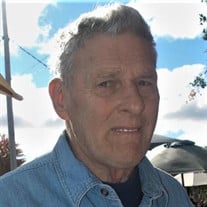 James (Jim) Carl Helmick was born on April 2, 1930 in Dearborn, MI to Carl and Mary (Edna) Helmick. He died at the age of 91 on May 4, 2021. Jim was the oldest of seven children. He was a prankster whose carefree, mischievous childhood was spent roaming the woods and fields around Dearborn. Occasionally he jumped the fence at Greenfield Village and was chased off Ford property many times while dropping his fishing line. This was the beginning of his lifelong curiosity and love for all things living - trees, fish, plants, wildflowers, birds, and forest animals. Jim graduated from Dearborn High in 1949 and enlisted in the U.S. Air Force immediately following the outbreak of hostilities in Korea. As an instructor in a newly formed Survival and Rescue training program, he taught Escape and Evasion tactics, as well as Wilderness Survival to bomber flight crews. Jim was exceptionally skilled with his hands, being encouraged by his mother to build his first wooden model airplane before the age of ten. He could later make anything out of wood, fiberglass or metal. After leaving the Air Force, his entries in local and national model aircraft competitions impressed some rivals employed at the Ford Styling Design Center. With their encouragement and support, he was offered employment in the metal design department where he created lettering and logos for prototype and production cars including the (original) Mustang, Cougar, Thunderbird, Lincoln and other models. In 1956, he met Joanna Barresi (his “little” Jo) at a dance on the Boblo Island boat. They immediately hit it off and married six months later, on April 27, 1957. Jim and Jo had four children together: Ken, Ross, Sue and Sandi. His children would later say that when it came to parents, they hit the “jackpot.” Jim and Jo were loving parents who were always supportive and positively available for their children. Jim was an affectionate father and husband who was never shy about telling his children or wife that he loved them. To Jo’s embarrassment, he emotionally told EVERYONE how much he loved her - often in her presence. In 1967 the family moved from Livonia to Grayling, MI where Jim later accepted the position of Manager of Product Development at Bear Archery. During his years with the company, he developed the magnesium handles for the original Bear Take-Down Bow, designed the 76’er take down bow, the Whitetail Hunter compound bow, the Bear Weatherest arrow rest, and a variety of associated archery tackle. In addition to developing products, he wrote production processes, designed and built machines used to manufacture Bear products. After Bear Archery relocated to Florida in 1979, Jim moved to Traverse City where he continued to do freelance work for various archery companies. Jim was generous with his time, effort, and resources - almost to a fault. He had a big heart and often lent a hand to someone, whether it was pushing a car out of a ditch, lending tools, donating his time to make custom items for people (everything from a commercial bakery sink, flag poles to gun stocks), giving away his hand-crafted bows, snow blowing, removing dead trees, making porches handicap accessible and doing home repairs for his neighbors. He always refused compensation and was reticent to seek assistance from others. Jim was active, gregarious, had a lively, goofy sense of humor and could almost invariably get a laugh out of someone. In his later years, Jim especially enjoyed spending time helping his wife Jo in their garden (he did the big work, she was the weeder). They would pray together and sit companionably talking - often over a cup of coffee. He became a Grandfather and absolutely loved spending time with his Grandkids. He passionately pursued advocacy for sensible wildlife habitat management, becoming a very familiar face to many State and Federal wildlife officials. He loved his spaniel companions, and usually had one in tow or slavishly perched on his lap. They spent countless hours tramping through the woods together. On July 30, 2019, he lost his Jo after 62 years of marriage. The last words he said to her at the time of her passing was that someday he would join her, and they would dance together again on the Boblo Island boat. We’re sure they’re reunited, happily dancing to their favorite 50’s romantic songs. Jim is survived by his children Ken, Ross (Heather), Sue (Craig) Reamer and Sandi Helmick, as well as his grandchildren Nolan, Drew, Sarah and Matthew. He was preceded in death by his best friend, his “Little Buddy” Jo. Jim and his family are being cared for by the Reynolds Jonkhoff Funeral Home.

James (Jim) Carl Helmick was born on April 2, 1930 in Dearborn, MI to Carl and Mary (Edna) Helmick. He died at the age of 91 on May 4, 2021. Jim was the oldest of seven children. He was a prankster whose carefree, mischievous childhood was... View Obituary & Service Information

The family of James "Jim" Helmick created this Life Tributes page to make it easy to share your memories.