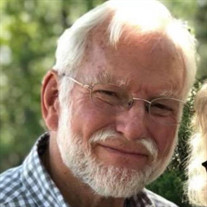 James Harrison Hilt Sr., 82 of Old Mission MI passed away Wednesday, May 20th of heart failure. Jim was born in Detroit on December 16th 1937, son of the late George Ferdinand and Marian (Leighton) Happel from Poe Valley VA and Old Mission MI respectively. Jim attended school in Lake Worth FL, where he was a member of the marching band and swim team. Graduating high school he attended Auburn University studying electrical engineering. In 1959 Jim met the love of his life, Carlene (Piatt, Maxwell) and on January 22, 1961 married in Bluefield VA. Together they built a life of love and marriage that spanned 60 years, five children, several moves, and countless close friends. Retiring in 1996 after a career with Kmart corporation that included eight years posted to the international headquarters, Jim returned to his roots settling in the family home on Old Mission peninsula where he enjoyed his bliss that was his wife, family, friends and community. Jim and Carlene are members of the First Congregational Church. Jim was born with a genuine love for life that he never lost, he loved the sound of his mother’s laughter and playing games with his brothers. He enjoyed his summers growing up working his grandfather’s farm and cherished those memories with his cousins. His life and marriage were built on a foundation of strong faith in Jesus Christ, serving the lord leading worship services, as Sunday school teacher, Deacon, and with the Gideons. He invested his love and joy into his own family where he is remembered as the husband, father, grandfather and great grandfather full of laughter, supreme dad jokes, and masterful pranks. He was never far from Carlene’s side, his main source of enjoyment was doting on her and seeing to her needs. Their life together was among the many inspirations they provided to their kids, grandkids, great grandkids, and friends. From his roots and into his community Jim never knew a stranger, quick with a smile and a handshake he was a friend to everyone he met, offering help in any way. He never left a friend in need and everyone he met left his presence a little lighter for it. Jim was a true Patriarch to his family, who loved to reminisce – a man with a true moral compass tempered by compassion, full of wisdom and bound by love for family, friend and neighbor. He will rest eternally in the Ogdensburg cemetery to the ground that he loved so dearly. We are eternally grateful for his presence in our lives, he will be greatly missed. A memorial for family and friends will take place at 11:00 AM on Saturday, August 15, 2020 at First Congregational Church in Traverse City. The service will take place outdoors at the church and masks will be required. He is survived by his wife, Velma Carlene Hilt of Old Mission MI; his brother Richard (Sandra) Hilt of Colorado Springs CO, Children; Robert (Virginia) Maxwell of Blacksburg VA, Don Randal of Old Mission MI, Marian (Mark) Wood of Cedar Springs MI, James (Julie) Hilt II of Gaylord MI, Allison (Steve) Cline of Allen Park MI. Grandchildren; Steven Cline of Allen Park, Nathan (Bree) Maxwell of Phoenix AZ, Ray (Angela) Cline of Allen Park, Mitch (Carley) Bearden of Gouverneur NY, Cheyenne Hilt of Gaylord, Rachel Wood of Southhaven MS, Elise (Jeff) Sanford of Cedar Springs, James Hilt III of Gaylord, Sierra Hilt of Petoskey MI, Brittany (Justin) Rondo of Johannesburg MI. There are 12 ¾ Great Grandchildren. Jim was preceded in death by his parents; George F Hilt, step father Albert Happel and Marian (Leighton) Happel; his brother William C Hilt; Grandson Ezra Maxwell.

The family of James Harrison Hilt Sr. created this Life Tributes page to make it easy to share your memories.