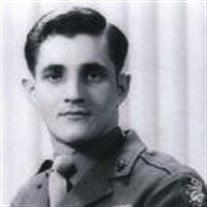 James Hornyak, 93, of Traverse City passed away November 13, 2014 at Glen Eagle Senior Living Community. Jim is survived by his four children: Charles Hornyak, Jackie (Art) Breithaupt, Jim (Kim White) Hornyak and Ken (Kriste Kerlin) Hornyak; his siblings Theresa Brosky, Michael Hornyak and Marge Sliwinski; and nine grandchildren and four great grandchildren. Jim was born on November 2, 1921 in Detroit to Michael and Anna (Suhi) Hornyak, and was raised in the ethnic Del Ray neighborhood. During World War II, he was in the Pacific theater serving in the U.S. Marine Corps. Afterward, he studied memorial design and engraving at the Barre School of Memorial Art in Barre Vermont. His craftsmanship can be seen on tombstones throughout northern Michigan, as well as in Detroit and far-away places like Africa and Bermuda. One of his most remarkable works is the Veterans Memorial in Suttons Bay Township. Jim married Ethel Kristofic on November 24, 1951; she preceded him in death on February 22, 1988. On June 24, 1989, he married Lottie Demo, she preceded him in death on October 26, 2010. Also preceding him in death was his sister, Ann Harbowy. A Memorial Mass is scheduled for 11 a.m. on November 24, 2014, at St. Francis of Assisi Catholic Church in Traverse City, with visitation beginning at 10 a.m. The family will greet guests at a luncheon in the family center following Mass. In lieu of flowers, please donate to one of Jim’s favorite charities: the Mid-Michigan Honor Flight, the Father Fred Foundation or St. Jude Children’s Research Hospital.

The family of James Hornyak created this Life Tributes page to make it easy to share your memories.