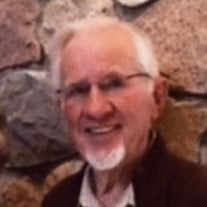 James E Hughes was born in Beaverton, Michigan to Clara and Lawrence Hughes in late summer 1930. He was known affectionately as Jim to six brothers, one sister, and countless friends over his ninety years. He was lovingly called Dad by his son Jim (Robyn) and daughter Anne (Jeff). He was Grandpa to five grandchildren, Megan (Ben) Smith, Emily Schrider, Zach (Jenaye) Hughes, Keegan (Beth) Schrider, and Ashlynn Hughes. To his five great-grandchildren, Kaden and Jasper Smith, Oliver Hughes, Luke and Jean Schrider he was known as 'Daddy GG'. Perhaps best of all he was called Jim, Honey and likely a host of other names by his devoted wife Margaret, whom he loved fiercely for more than 65 years. For over 60 years, between November trips to the Wild 80 Hunting Camp for deer hunting and cards with his brothers, friends and family, Jim worked for the State of Michigan, the Federal Trade Commission and then founded his own company (SRI) at age 59. Because he “never met a stranger” his company grew steadily, providing services to county governments in Indiana, Michigan, and several other states. He built many close relationships, especially in Indiana where he started his business. Many county officials knew Jim as a friend, not just a business associate. He felt each and every client deserved to be the company's most important client. At conferences there were many card games and conversations until the early morning hours. There is a common thread among them all. At every stop there was fun to be had and always a potential sale to be made! At age 85 he retired, happy that his company was now led by his son Jim and grandson Zachary. He and Margaret then moved to Leelanau County where they could be close to Anne & Jeff along with 3 of his grandchildren and 4 great grandchildren. Jim Hughes is an inspiration for all the things he was: an eternal optimist, someone who always greeted you by name with a great big smile, an inventive story teller, playful, mischievous, reliable and always ready to help. He was a man who loved his wife and his family with every beat of his heart and dime in his pocket. He died at home supported by family and listening to sounds of love and gratitude. This celebration of his life, what he called his “living memorial” continued for three days nearly round the clock in his and Margaret's living room. Stories were told and tears were shed, and hopes were shared by all that we might follow his example and love fiercely, act rightly, and care intensely for each other. The family will greet friends on Friday, June 11, 2021 at 1:30 pm, with the service to begin at 2:30 pm at the Gardens at Reynolds Jonkhoff Funeral Home. Memorial contributions in his honor may be directed to the Cowell Family Cancer Center or to Hospice of Michigan.

James E Hughes was born in Beaverton, Michigan to Clara and Lawrence Hughes in late summer 1930. He was known affectionately as Jim to six brothers, one sister, and countless friends over his ninety years. He was lovingly called Dad by his son... View Obituary & Service Information

The family of James E Hughes created this Life Tributes page to make it easy to share your memories.

James E Hughes was born in Beaverton, Michigan to Clara and Lawrence...