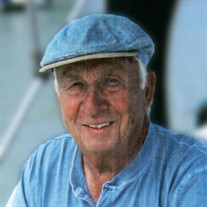 James “Jim” Richard Frye Torch Lake Township – Jim Frye, 85 of Torch Lake passed away at his home on April 16, 2017 with his family by his side. Jim was born on August 10, 1931 in Detroit to the late Warren and Nellie (Lewis) Frye. At the age of thirteen, he and his family moved to Eastport. His family owned and operated Frye’s General Store. He graduated from Central Lake High School and then enlisted in the United States Navy. He served his country honorably for four years. While on R&R in Miami, at a USO dance, Jim spotted the love of his life; Inez Helen Muter. It was love at first sight. The two married shortly after in Key West on May 1, 1954. Together they had three wonderful sons. After Jim was discharged from the Navy, they moved to St. Clair Shores, Michigan. Jim worked at Chrysler Financial Corporation for 38 years. While working, Jim went to night school, and in 1981 earned his Bachelors degree in Business Administration at Central Michigan University. He worked hard to provide for his family and succeeded in every way. In the late 1980’s Jim and Inez bought a home on Torch Lake, and upon retirement decided to move ‘up north’. It is here that he enjoyed boating, golfing, and card games with his buddies. Jim was the living example of a ‘good neighbor’. Jim was always ready to lend a hand and brighten someone’s day. He was famous for his Petoskey stone necklaces and whenever Inez wears hers it is always admired by onlookers for its unique beauty. As a result he would be found hard at work creating one for another lucky lady. He also loved to take care of his property and make friends at A-Ga-Ming Golf Course, where he worked as a starter and ranger. For the last 16 years Jim and Inez have enjoyed wintering in their Naples, Florida home. Jim will be greatly missed by his family, friends and fellow members at the Elk Rapids Am Vets and the Elk Rapids Calvary Lutheran Church. Jim was preceded in death by his sister Virginia King. Jim is survived by his beloved wife of 63 years, Inez; sons James “Jim” (Sue) Frye Jr. of Traverse City, John (Lawrence Nallan) Frye of San Francisco, and Jeffrey (Dena) Frye of Rochester; grandchildren Stephanie, Alexa, Jake and Destiny; brother Robert Frye; brother-in-law John King; niece Brenda Moore and nephews Dick (Sue) King, Jim (Cheryl) King and Bobby Frye. Jim’s life will be celebrated at the Torch Lake Café in Eastport on April 26, 2017 at 11:00 am. The service will be led by Rev. David Mellor and military honors will be provided. Memorial contributions in memory of Jim may be directed to the Elk Rapids AmVets Post 114 or to a charity of one’s choice. Please visit www.reynolds-jonkhoff.com to share your memories and condolences with the family. The family is being cared for by Reynolds-Jonkhoff Funeral Home and cremation services.

The family of James "Jim" Frye created this Life Tributes page to make it easy to share your memories.