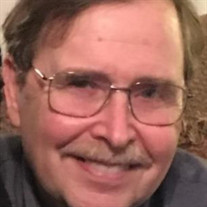 James Arthur Keedy, of Traverse City, was born February 23th, 1952 in Wyandotte, MI to Arthur and Regina (Zalewski) Keedy. He attended Wyandotte Roosevelt High School and graduated in 1970. He went on to attend Michigan State University as well as Wayne State University's School of Law. Jim is preceded in death by his wife, Cathy (Garrick) Keedy, his parents, brother Robert Sawicki, sister-in-law Providence (Iacopelli) Keedy, and brother-in-law Joseph Orzechowski. He is survived by his sisters Elizabeth (Sawicki) Orzechowski and Janice Adams (Doug), his brothers Daniel (Kathleen) and John (Deb), his sister-in-law, Betty Jean Sawicki as well as 17 nieces and nephews. Jim was an attorney for the United Auto Workers (UAW). He also worked for Legal Aid in Ann Arbor, MI and Jackson, MI. For 35+ years, he was the Executive Director of Michigan Indian Legal Services in Traverse City, providing legal services to income-eligible individuals and Tribes, advocating for rights, and working to preserve Indian families through state and tribal court systems. In 2018, Jim retired from his position with MILS. Jim was also a member of the Knights of Columbus #9979 where he had the honorary title of Grand Knight. He was very active in his church, Christ the King Catholic Church in Williamsburg, MI serving as an usher. In addition, he took part in missionary work in Jamaica, part of a church project. Jim enjoyed photography, old movies, and traveling. He was and is still loved by so many and will be missed immensely. Visitation for Jim will take place on Tuesday, February 8th at Czopek Funeral Directors in Wyandotte, MI, with his funeral mass taking place in Traverse City on Saturday, February 12th. Interment will take place at Oakwood Cemetery, 1720 Hannah Ave., Traverse City, MI 49686. In lieu of flowers, donations can be made to MILS.org or to Christ the King Jamaica Project. If mailing donations to the church for family, please send to Christ the King Catholic Church P.O. Box 95 Acme, MI 49610.

The family of James Arthur Keedy created this Life Tributes page to make it easy to share your memories.