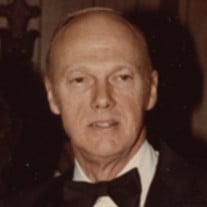 James R. Laukhart, 81, of Traverse City passed away peacefully on Thursday, July 31, 2014 at Tendercare Birchwood. Jim was born on March 23, 1933 in Dayton, Ohio to the late Harry and Walburga (Borgerding) Laukhart. He was married to Rose Marie Richie on September 11, 1954. Jim proudly served his country in the U.S. Air Force for 20 years. He enlisted in 1951 and retired as an E6 Technical Sergeant in 1971. He served in the Vietnam War. Over the course of his career Jim received numerous medals. Jim was active in many organizations; he was a member of the Air Force Sergeant Association, Retired Enlisted Association, the National Association for Uniformed Services, Life member of Cherryland V.F.W. and the Vietnam Veterans Association. Jim was very proud to be a Mason. He was raised to the degree of a Master Mason in the Traverse City Lodge #222, Free and Accepted Masons, serving as Worshipful Master and Senior Steward. Jim was chosen by his brothers as the Mason of the Year 2010. He served with his father-in-law and brother-in-law in the Traverse City Lodge. He joined the Scottish Rite, Valley of Traverse and the Valley of Grand Rapids, receiving the 32 Degree of the Scottish Rite Masonry. Jim is survived by his wife, Rosemarie, daughter, Susan (Daniel) Cahalan, and son Timothy (Cindy) Laukhart. Also surviving are three grandchildren; Heather, Kimberly and Christin Laukhart, one great-granddaughter, Cierra Laukhart and a niece, Kathleen Adkins. He was preceded in death by a brother, Dennis Laukhart and a sister, Barbara Adkins. A Candlelight Masonic Chapel Service by Masonic Lodge #222 F&AM, honoring James will be held at 7:00 p.m. on Friday, August 8, 2014 at the Reynolds-Jonkhoff Funeral Home. Friends are welcome to visit with Jim’s family for one hour prior to the service. Military Honors will be conducted under the auspices of Cherryland V.F.W. Post 2780. Those planning an expression of sympathy may wish to consider a memorial donation to the National Masonic Foundation. Please feel free to share your thoughts and memories with Jim’s family at www.reynolds-jonkhoff.com. The family is being served by the Reynolds-Jonkhoff Funeral Home and Cremation Services.

James R. Laukhart, 81, of Traverse City passed away peacefully on Thursday, July 31, 2014 at Tendercare Birchwood. Jim was born on March 23, 1933 in Dayton, Ohio to the late Harry and Walburga (Borgerding) Laukhart. He was married to Rose Marie... View Obituary & Service Information

The family of James R. Laukhart created this Life Tributes page to make it easy to share your memories.