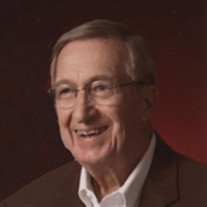 James Arthur Meyer was welcomed into this world on February 7, 1934. Jim, as he was known, experienced a life well lived. Even with his optimistic and courageous outlook Jim could not win the challenges in his battle against the cancer that took his life, but not his spirit, on October 18, 2018. Jim, 84, was born to Arthur and Marion (Hawkins) in Detroit. He attended Catholic elementary schools and graduated from Detroit Catholic Central High School. He participated in baseball, basketball, and track, but skiing was his favorite activity. Jim skied Boyne Mountain where he reached the peaks by rope tow. He often drove his two sisters and their friends to Boyne for weekend fun. Jim served as Army Corporal and was in the Military Police while serving as a Korean veteran. He was reassigned to accounting in the Army at Fort Bragg. Jim, an accounting major, graduated from the University of Detroit and earned the title of CPA. Jim was proud to have interned with Plante and Moran Accounting in Detroit. At times he joked his CPA title stood for Cleaning, Pressing, and Alterations. In 1960 Jim was offered his dream job in Traverse City. While acting as comptroller for Koenig Construction Company he continued to donate his talents and abilities to recognizable, established archives for all to enjoy. He believed “when you live in a community it’s your responsibility to give your talents, time, and expertise back to the community”. He played a role in raising and managing money for the Easling Memorial Pool (Paul Easling, his former business partner), and Traverse Area Foundation (presently called Open Space). The Optimist Club was Jim’s favorite philanthropic project. He was the longest living member of the Traverse City Club and served as President, and as Lieutenant Governor of District 1 Optimist Clubs of Michigan. He was on the Board of Trustees for the non-profit Traverse City Optimist Youth Foundation, including a natural property intended for use by youth groups. The acreage was a gift from his friend and fellow Optimist Art Schmuckal. National Cherry Festival was governed by Jim as President in 1970-1971 and as Chairman of the Board of Trustees in 1991-1992. Jim was an active member of Immaculate Conception Church for over 50 years. He established and maintained a sound financial system for the church which remains to this day. In 1980 Jim was elected as a Leelanau County Commissioner and served on the County Board of Commissioners and as Chairman from 1982-1984. In 1972 Jim and his soulmate Ede were married by Father Fred in All Faiths Chapel. Jim was a wonderful father and role model for all five children. His sage advice was “find something you like to do and make a living at it.” We’ll try to help you reach your goal!” Jim and Ede enjoyed being with their five children traveling with the family to Puerto Rico, Bahamas, Mexico, Snow Bird, Grand Canyon and Aspen. Living on Lake Leelanau for 40 years is steeped with memories for the entire family. The lake house is filled with stories about the family growing up: school activities, holidays, celebrations, graduations, weddings, babies and joy and sorrows. Memories of good times with Jim and his days spent with the kids playing on the water, snow skiing, trailering horses, and enjoying the family dogs will always be part of the stories shared about Jim. Although the lake house was special to Jim and Ede they settled into condo living at Black Bear Farms. The lifestyle offered a change of pace and simplicity. During their retirement years Jim, Ede and Ella (their beautiful standard poodle) spent winters on the beach in Gulf Shores, Alabama. They enjoyed long beach walks, beautiful sunsets, outings with new friends, shrimp dinners and southern cooking. Surviving Jim is his wife Ede, “Ella” and their adult children: John (Linda) Meyer, Vincent (Rose Bower) Meyer, Julie (Mike) Bellaw, Jennifer Blakeslee, and Richard Blakeslee (Melissa Whitman). Also six grandchildren: Dylan Meyer, Lucas Meyer, Abigail Lange, Rebecka Bellaw, Gaelan Blakeslee, and Freya Blakeslee. Jim is also survived by his sister, Sally Stemmer and former wife, Doreen Meyer. He leaves behind additional relatives and friends. Jim was preceded in death by his infant daughter Ann Marie, parents Marion and Arthur Meyer, and his sister Mary Jo Jansen. Jim’s long-time friend, Father James Hayden will officiate the Mass of Christian Burial at Immaculate Conception Church on Monday, November 12, 2018 at 11 a.m. A reception will follow in Centennial Hall at Immaculate Conception. Memorial contributions in Jim’s memory may be directed to the Traverse City Optimist Youth Foundation, P.O. Box 2258, Traverse City, MI 49685 (contact Mike Brown or Sam Mitchell) , the Immaculate Conception Food Pantry, 308 N. Cedar St., Traverse City 49684 or to The Father Fred Foundation, P. O. Box 2260, Traverse City, MI 49685.

James Arthur Meyer was welcomed into this world on February 7, 1934. Jim, as he was known, experienced a life well lived. Even with his optimistic and courageous outlook Jim could not win the challenges in his battle against the cancer that... View Obituary & Service Information

The family of James Arthur Meyer created this Life Tributes page to make it easy to share your memories.

James Arthur Meyer was welcomed into this world on February 7,...