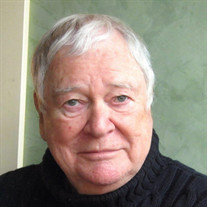 James Clark Moore, PhD, 84, of Traverse City, passed away unexpectedly Tuesday, November 10, 2020 at his home. Born on July 27, 1936 in Dow City, IA, he was one of two sons born to the late Theodore R. and Lois A. (Best) Moore. He was frequently uprooted and attended more than 15 schools before he settled in Crystal Falls, MI where he graduated at the top of his class and served as their president. From there he continued his education at the University of Nebraska-Omaha, earning a BA in economics. He was a member of Sigma Phi Epsilon social fraternity, president of Omega Delta Kappa and Corinthians Scholastic Society. While attending UNO, he met Donna Rae Brinlee who was working on her elementary teaching degree. They became close friends and ultimately would be married on December 28, 1959. After completing his PhD at the University of Minnesota, he accepted a position at the University of Missouri, and eventually joined the faculty at Purdue University in 1969. Jim would teach there until 2006 and upon his retirement was named Professor Emeritus of Economics. Jim’s primary teaching and research interests included microeconomic theory, general equilibrium theory, the economic theory of public policy and the economics of information and organization. In addition to his teaching career, Jim was an accomplished writer and researcher. While at Purdue, he mentored many doctoral students and served as policy chairman for the Economics department. Jim was truly a gentleman and a scholar. His life was filled with music, art, his love for dogs, Purdue sports and especially his love for friends and family which enriched his character. He was loved and admired by many. Surviving Jim is his wife of 60 years, Donna; two sons, J. Donovan (Amy) Moore of Burnsville, MN; Brian D. Moore of Traverse City; a brother, Dwight Jerome (Linda) Moore of Tucson, AZ; a niece, Julie Monie of Omaha, NE and nephews, Brad Moore of Costa Mesa, CA and Ted Hobbs of Portland, OR. Because of the current issues, a time to celebrate Jim’s life will take place at a later date. Details will be announced at that time. For a lasting memorial, the family suggests that Jim be remembered through a donation to the American Heart Association.

James Clark Moore, PhD, 84, of Traverse City, passed away unexpectedly Tuesday, November 10, 2020 at his home. Born on July 27, 1936 in Dow City, IA, he was one of two sons born to the late Theodore R. and Lois A. (Best) Moore. He was frequently... View Obituary & Service Information

The family of James Clark Moore PhD created this Life Tributes page to make it easy to share your memories.