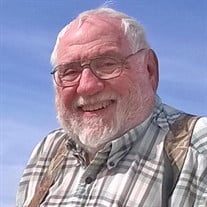 James Arthur Morrison (Jim) passed away August 16, in Traverse City, MI after 85 years of an adventurous, full life of family, flying, and fun, rooted in a deep faith. Jim was born on July 24, 1934 in Wadsworth, OH to Leslie and Gladys (Smucker) Morrison. Jim graduated from Wadsworth High School in 1952 and married his high school sweetheart, Sally (Parmelee) Morrison on August 20, 1955 while studying civil engineering at Case Institute of Technology. With a true joy and passion, Jim spent his life as a professional civil engineer and surveyor, contributing significantly to, and shaping the infrastructures of Wadsworth and other communities in Northeast Ohio. There were always projects in motion, up to his last day. Jim's passion included spending time at Wadsworth airport with friends, working on his plane, and discovering trails and shortcuts through the forest around the family cottage in Fife Lake, MI. A consummate storyteller, tinkerer, and builder of contraptions, he also enjoyed exploring mountainous backroads seeking original survey monuments near his winter home in Green Valley, AZ. Inquisitive to the end, there was no such thing as giving up or getting lost, only adventure and a better story. Jim’s kindness toward people and his wonder for the world around him flowed from pure and simple love. “I see the glory of God in all of your faces" he told his daughter as the family gathered with him before his passing. All who knew him testify to how Jim showed us all how to live lives of forgiveness, generosity, and hope. Jim will be deeply missed by Sally, his wife of 64 years with whom he built a foundation of love, joy, and inspiration for their family; son James Arthur Morrison II (Susie); daughter Julie (Morrison) Kieser (Mark); sisters Carolyn (Dale) Stoll and Becky (Jorge) Alonso; grandchildren Steven (Val) Morrison, Ellen Morrison, Greg Morrison, Kaitlin (Jason) Vredeveld, Josh Kieser and Jenny Kieser; great-grandchildren Sam and Henry Morrison, Madelyn and Jacob Vredeveld… and so many more family and friends that Jim held dear to his heart. Jim’s life and legacy will be celebrated September 14, at 1 pm, with visitation starting at 12:30 pm, at Trinity United Church of Christ in Wadsworth, OH. A light lunch will follow. There will be a second memorial at Desert Hills Lutheran Church, Green Valley, AZ later this fall. In lieu of flowers, we ask people to consider making gifts to the EAA Aviation Foundation. As an avid lifelong aviator, Jim took great pride in introducing the next generations to aviation. Memorials will go towards a flight training scholarship in Jim’s name to a deserving young person. Please make checks payable to EAA Aviation Foundation and in the memo line write “Jim Morrison Memorial Scholarship.” Checks can be given to the family or sent to EAA Aviation Foundation, P.O. Box 3816, Oshkosh, WI 54903. If you wish to make your gift online go to: www.eaa.org/eaa/support-eaa.

James Arthur Morrison (Jim) passed away August 16, in Traverse City, MI after 85 years of an adventurous, full life of family, flying, and fun, rooted in a deep faith. Jim was born on July 24, 1934 in Wadsworth, OH to Leslie and Gladys (Smucker)... View Obituary & Service Information

The family of James Morrison created this Life Tributes page to make it easy to share your memories.