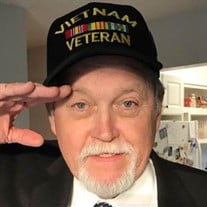 Obituary for James Wegener Jim “Wags”Wegener passed away unexpectedly on the 8th of November 2019 at home peacefully in his bed. Jim could best be described as a loyal and passionate man. His love for his family and his country trumped everything else. Jim was an amazing husband, father and veteran. Jim’s interests were evident as he always wore them on his sleeve. He could always be found wearing his Vietnam veterans' hat, patriotic tee-shirt and coffee mug with pictures of his grandkids printed on it. Jim graduated from St Francis as a football hero and homecoming king. He sold cars for years, drove a school bus for TCAPS, and was currently a limo driver. Jim was drafted into the Army during the Vietnam war in 1968. In his 2 years of service Jim traveled the country and the world in defense of our freedoms. He served as a baker in Vietnam and a brief stint as a drill instructor at Fort Sam Houston. Though Jim’s formal service to our country ended after the Vietnam war, he continued his service through numerous veterans' organizations to include the local Vietnam Veterans’ chapter, Veterans of Foreign Wars, Grand Traverse County Board of Veterans Affairs and he was a founding member of the Grand Traverse Area Veterans Coalition. Jim was scheduled to be the master of ceremonies for numerous events for this Veterans Day, and planned to read the following thank you letter to all veterans during his speech: “As I get a bit older each year, I have really begun to appreciate the freedoms that I have. We live in the greatest country in the world, due in part to the efforts of our armed forces who often put themselves in harm’s way to protect our rights, freedoms, and our people. I just wanted to personally say to each of you that served that I really appreciate what you did to protect us all. God Bless You, and God Bless America.” Jim was always the person to have on your side. He was fiercely loyal to everyone he loved and would literally give the shirt off his back if it was needed. He was a man of quick wit and was an expert at delivering the best “one liners”. He will be deeply missed. Jim is survived by his wife Susan Wegener (Lenhard), his daughters Emily Opper and Amy Weisberger, his step son David Brouse ,three brothers, two sisters and 7 grandchildren. Jim was preceded in death by his mother Bernadine Wegener (Michels), his father John Wegener, and his brothers John Jr, Robert, and Joe. A celebration of life will be held at the Traverse City American Legion on Saturday November 23rd at 6pm, 1231 Hastings. All who knew Jim are welcome to attend to enjoy stories and good whiskey. The only request is that you wear Jim’s favorite color, green. The color of money as he would say. In lieu of flowers please send donations to the Grand Traverse Veterans Coalition 2650 Lafranier Rd, Traverse City, MI 49686.

Obituary for James Wegener Jim &#8220;Wags&#8221;Wegener passed away unexpectedly on the 8th of November 2019 at home peacefully in his bed. Jim could best be described as a loyal and passionate man. His love for his family and his country... View Obituary & Service Information

The family of James "Jim" Wegener created this Life Tributes page to make it easy to share your memories.