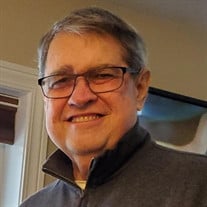 James Thomas Wright, 71, of Williamsburg, Michigan formerly of Cynthiana, Kentucky passed away peacefully on Thursday, October 1, 2020 at his home surrounded by his family and friends. Jim was born on January 29, 1949 in Jackson, Michigan to the late Edwin and Winifred (Porter) Wright. He married the love of his life Diana Scripter on August 23, 1969 in Horton, Michigan. Jim earned both his Bachelors of Business Administration. He had been employed in Human Resources for over 42 years, first with Kelsey Hayes Wheel Company and for the last 16 years with Hinkle Contracting Company. He was a member of both the Chamber of Commerce and the Rotary Club of Paris. After his retirement in 2013 Jim and Diana moved to Traverse City. He attended Williamsburg United Methodist Church. In his spare time Jim enjoyed playing golf and spending countless hours woodworking. He had a wonderful sense of humor and was always smiling and whistling. Above all, spending time with his family was his greatest joy. Jim is survived by his loving wife of 51 years, Diana, his daughter, Erin Ascione, his son, Justin (Rhonda) Wright, a granddaughter; Madelyn Ascione, three step-grandsons; Reed Harrell, Ryan (Ashley) Harrell and Robb Harrell also step-great-grandchildren; Caeden, Brayden, Camaron and Beau Harrell. Also surviving are two sisters; Edna (Roger) Strait and Susan (Jack) Sturgill as well as many nieces and nephews. Jim was preceded in death by a sister, Marjorie Holliday. A memorial service honoring James will take place at 1:00 p.m., with visitation one-hour prior at 12:00, on Tuesday, October 6, 2020 at the Williamsburg United Methodist Church, 5750 Williamsburg Rd., Williamsburg, Michigan, 49690. Rev. John Messner will officiate. Those planning an expression of sympathy may wish to consider a memorial donation to Williamsburg United Methodist Church, 5750 Williamsburg Rd, Williamsburg, Michigan, 49690 or Munson Hospice 1150 Medical Campus Dr., Traverse City, Michigan 49684. Please feel free to share your thoughts and memories with Jim’s family at his tribute page at www.reynolds-jonkhoff.com. The family is being cared for by the Reynolds-Jonkhoff Funeral Home and Cremation Services.

James Thomas Wright, 71, of Williamsburg, Michigan formerly of Cynthiana, Kentucky passed away peacefully on Thursday, October 1, 2020 at his home surrounded by his family and friends. Jim was born on January 29, 1949 in Jackson, Michigan to... View Obituary & Service Information

The family of James Thomas Wright created this Life Tributes page to make it easy to share your memories.