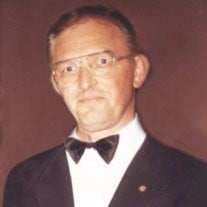 Traverse City - Jim Harvey, 72, of Traverse City passed away March 6, 2013 at Munson Hospice House. Jim was born on August 29, 1940 in Traverse City to the late James and Lorena (Clouse) Harvey. After graduating from Traverse City High School, Jim enlisted in the United States Navy. He served honorably from 1958 -1961 and was a radarman aboard the USS Waller that served in the Bay of Pigs. On January 8, 1972 Jim married the former Barbara Ann Rayle. Jim was a member of the first Police Academy in the State of Michigan. He began his career with the Traverse City Police Department in 1963, and in 1965 began working with the Sheriff's department. He faithfully served in the Sheriff's department until his retirement in 1998. Jim was the founder of the McGruff Program that took a bite out of crime and advocated for neighborhood watch. He also was involved in bank security. In his spare time Jim enjoyed golfing. You could often find him on the course, usually Mitchell Creek, from sun up to sun down. He was also a talented drawer and cartoonist. Jim had an excellent sense of humor, and always greeted you with a joke or two. Landscaping was another passion of Jim's, and he was known for his beautiful yard. He will be greatly missed by all who knew him. Jim is survived by his wife of 41 years, Barb, children Nancy (Jim) Kirsch of Traverse City, Mike Harvey of Atlanta, GA, Debbie (Bruce) Wooters of Traverse City, Brian (Chris) Tithof of Fife Lake, grandchildren Danielle and Stephen Sternthal and Jeremy and Tyler Sternthal, brothers John Harvey of Flint and Jerry Harvey of Muskegon, and sister Rosella Bieber of Bradenton, Fl. A memorial service will be held on Satuday, March 9, 2013 at 1:00 pm with visitation beginning at 12 noon at the Reynolds Jonkhoff Funeral Home. Military honors will be provided by Cherryland VFW Post #2780. Memorial contributions in lieu of flowers may be directed to Munson Hospice House.

The family of James "Jim" Edward Harvey created this Life Tributes page to make it easy to share your memories.