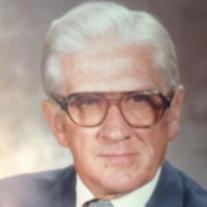 Traverse City - James Philo Thomas, 89, of Traverse City, passed away Sunday, May 6, 2012 at Munson Medical Center in Traverse City. Born, James Philo Thomas Jr., on December 3, 1922 to the late James and Myrtle (Froman) Thomas in Saginaw, MI. Jim answered the call of duty proudly serving with the United States Army Air Corp. as a fighter pilot during World War II. He even flew several missions over Normandy including D-day. On March 7, 1953 Jim entered into marriage with the former Robin Rambow in Saginaw, MI. Jim grew up in the Saginaw area before entering Michigan State College with a scholarship for swimming. Jim's talents swimming the butterfly allowed him to excel and swim for the team all the way through school. Jim went to work for Consumers Energy making his living and working his way up to division manager, retiring after 37 years. Jim enjoyed hunting and fishing and in younger years spent many hours on the golf course enjoying a round with friends. He had a passion for playing cards and would take any opportunity to play. Jim could be found playing poker, hearts, or cribbage, to name just a few, with many dear friends or family. He will be deeply missed. Jim is survived by his loving family, his wife of 59 years, Robin Thomas of Traverse City, two sons, Todd Thomas of Traverse City, and Michael (Ruth) Thomas of Virginia, two grandchildren, Trena and Jim and many other loving family members and friends. Jim was preceded in death by his parents, and three siblings. A brief memorial service with military honors will take place at 11:00 AM on Friday, May 11, 2012 at the Reynolds-Jonkhoff Funeral Home, followed by a time sharing for friends and family. The Rev. Justin Grimm will officiate. Memorial contributions may be directed to Cherryland Humane Society and VFW Garland post old mission Please share thoughts with the family at Jim's online guest book at www.reynolds-jonkhoff.com The family is being served by the Reynolds-Jonkhoff Funeral Home and Cremation Services.

The family of James"Jim" Philo Thomas created this Life Tributes page to make it easy to share your memories.