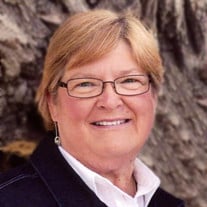 Janet Louise Brown, 66, of Traverse City passed away at her home with her family by her side on February 20, 2019 after a valiant battle with cancer. Janet was born on March 7, 1952 in Traverse City to the late Alex and Irene (Popa) Schettek. Janet was a 1970 graduate of St. Francis High School. On October 28, 1972 Janet married the love of her life, Skip Brown. Janet devoted her entire life to the care of others, from raising her daughters to caring for hundreds of children over the 27 years of owning and operating her own in home daycare, to the enormous role she has played in the lives of her grandsons. She was very humble and was never one to brag or boast about what she had done. Janet spent many special times going to the beach and hunting for rocks, especially for Petoskeys and Leland Blues with family and friends. She also enjoyed cooking for others and had a love of flowers and gardening. Janet and Skip thoroughly enjoyed their trips south searching for sand dollars and sea shells on the ocean. Faith was very important to Janet and before she passed, told her family she was sad to leave them, but was looking forward to being with Jesus. Janet and Skip founded Freedom Builders Missions. After “retiring” from daycare Janet went on to an administrative role with Freedom Builders, again caring for the needs of others in her own humble way. Without Janet, Freedom Builders would never have succeeded into the wonderful mission it is today 19 years later. Above all else Janet cherished her family and will be deeply missed by her husband of 46 years, Skip; her daughters Sara (Andy) Bogard of Elk Rapids and Carrie Brown (Eric Warnes) of Traverse City; grandsons Fisher, Noah and Corbin and her sister Nancy (Rocky) Welch of Maple City. Her Mother-In-Law, Louise (Bill) Brunelle, sisters-in-law Lynn (Dan) Steinebach and Sue (Dirk) Sawusch and nieces and nephews, as well as the many friends she held dear. Visitation for family and friends will be held on Wednesday February 27, 2019 from 2 to 4 and 6 to 8 pm at the Reynolds Jonkhoff Funeral Home. The funeral service celebrating her life will be held on Thursday, February 28, 2019 at 3 pm with visitation beginning one hour prior at the Buckley Tabernacle. Memorial contributions in memory of Janet may be directed to Freedom Builder Mission or Hospice of Michigan. Please share your memories with the family at www.reynolds-jonkhoff.com

Janet Louise Brown, 66, of Traverse City passed away at her home with her family by her side on February 20, 2019 after a valiant battle with cancer. Janet was born on March 7, 1952 in Traverse City to the late Alex and Irene (Popa) Schettek.... View Obituary & Service Information

The family of Janet Louise Brown created this Life Tributes page to make it easy to share your memories.

Janet Louise Brown, 66, of Traverse City passed away at her home...