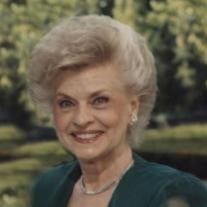 Janet Marie Fluehr, 81, of Traverse City and formerly of Birmingham and Bloomfield Hills, Michigan, passed away peacefully Saturday, September 8th, in Traverse City. Janet was born on June 24, 1931 to the late Roy and Janet “Jay” (Slaght) Deuscher in Bay City, Michigan. Janet was brought up in Bay City and graduated from T.L. Handy High School. During her High School years she met Kuhlman Fluehr at the Bay City Players drama productions in which both had acting roles. Janet went on to Monticello College in Illinois before attending the prestigious Pasadena Playhouse, California where she earned her degree in acting and directing. She and Kuhlman were married in Carmel, California on April 22, 1955 and enjoyed 56 years of harmonious marriage. Following several years living in Salinas and Pebble Beach, California, they returned to Michigan where they resided in Birmingham and Bloomfield Hills before moving to Traverse City in January 2011. Janet was an imaginative and accomplished artist mostly in oils and acrylics, creating many quality paintings. She was an avid reader and she and Kuhlman enjoyed extensive world travel. She will always be remembered for her ready willingness to help others - sharing her talents and giving of herself in the culinary arts and setting an elegant table. She had a flair for exquisite interior decorating. Janet was a member of the Bloomfield Women’s Antiques Group and one of her many interests was the study of antiques. Her home reflected her love of culture. She was a member of the Village Club and a long-time Christian Scientist. Janet was a loving mother, and devoted wife. She is survived by her loving family; her daughter, Janet “Jandy", son-in-law, James T “Jim” Cooley; son, Glenn Fluehr; daughter-in-law “Paulina”; four grandchildren, Paige and Tanner Cooley, Heather "Tiffany" and Victoria Fluehr; brother and sister- in-law, David and Janet Meynell Fluehr and many nephews, nieces and friends. She was preceded in death by the love of her life, her husband Kuhlman Fluehr on September 27, 2011. No public memorial service is planned. Memorial contributions may be directed to First Church of Christ, Scientist, Traverse City or The Village Club, Bloomfield Hills, or the charity of one’s choice.

The family of Janet M. Fluehr created this Life Tributes page to make it easy to share your memories.

Janet Marie Fluehr, 81, of Traverse City and formerly of Birmingham...