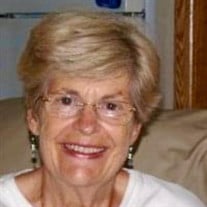 Janet Jean Hintz, age 90, died on Feb 1, 2022 in Traverse City, Michigan. She was born to Kenneth and Grace (Omta) Grubbe in Portland, Oregon. She had one sister, Pat Janet often spoke of a happy childhood filled growing and preserving foods, sewing and knitting with her mother, singing on car trips with her dad and sharing adventures with her sister Pat. She was especially proud of growing camellias from saplings. During her school years she took drama classes, loved school dances and formal events with her high school sorority. Above all else she wanted to be a wife and mother. Janet found the perfect mate in Wayne Hintz and together built a family with four children. In 1957, Janet and Wayne moved to Alma, Michigan where Wayne was a coach and teacher at Alma College. In 1966 they moved to Traverse City fulfilling their dream of living on a lake. Janet worked for Milliken’s department store until her retirement. After retirement she joined the dance group, Happy Tappers and traveled with her husband. Janet loved challenges whether it was fixing household appliances, creating dance costumes or new patterns for knitting and crocheting. She was an avid watercolorist fearlessly tackling landscapes, animals and portraits. Janet was always interested in meeting and talking with people and literally lit-up when she was with people. Janet mischievously danced around the house, wore exotic dance costumes, made sauerkraut cake and was the bathing beauty of Silver Lake. She threw herself at life without fear, always ready for a new adventure. Janet lost her husband Wayne in early 2019. Her dear sister Pat died a few months later. Randy Jeremiah, her sister’s son, died in 1968 during the Vietnam war. Janet leaves behind four children and their families. Daughter Saundra Hintz (husband Reed Zitting) and daughter Jennifer (Joe) Patanella and children Angela, Jacob and Carson. Daughter Karlene Boeve, (husband Ted) and children Mark (Bonnie) and son Lawson; and Michelle Boeve (Jérémy) and daughter Madeleine. Daughter Barbara Edwards, (husband Vince) and children David (Kaleigh)and son Abram; and Sara (Nick)Hawkins and son Eli. Son Daniel Hintz and wife Susan. Also surviving are Janet’s nieces and their families in Portland Oregon, her sister Pat’s family: Sharon (Mohamed) Daye and daughter Laura Daye (Derek Long) and son Freddie. Niece Marla Jeremiah. A memorial service will be held on Wednesday, February 9, 2022 at the Reynolds-Jonkhoff Funeral Home at 3pm with a visitation beginning at 2:30pm. Memorial contributions may be directed to the Cherryland Humane Society. Kindly share thoughts and memories with Janet’s family at www.reynolds-jonkhoff.com.

The family of Janet Jean Hintz created this Life Tributes page to make it easy to share your memories.