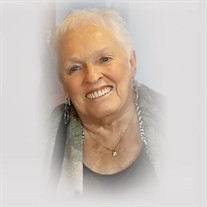 TRAVERSE CITY - Janet Joy Kerlin, loving and joyful wife, mother and friend, passed away on Saturday, September 7, 2019, at her home on Elk Lake in Williamsburg, Michigan and pronounced deceased Sunday, September 8, 2019, at Munson Medical Center surrounded by her loving family. She was born on July 25, 1937, in Standish, Michigan to the late Clarence and Lottie (Hornyak) Demo. She spent most of her childhood in Flint, Michigan and was a graduate of Flint Central High School. On September 22, 1956, she married her soul mate for life, Robert (Bob) Kerlin in Flint, Michigan where they began to raise their four children. In 1973, Janet and Robert relocated to Traverse City, Michigan with the desire to provide a better life for their children. Janet not only looked forward to the opportunity to build new friendships, she also fell in love with the views and landscapes offered by her new home overlooking East Grand Traverse Bay. You could always count on Janet to brighten any situation with her twinkling blue eyes, constant smiles and jovial laughter. She found in each day a way to share her love with others, including all her children, grandchildren and many dear friends. She was a shining example of the most wonderful wife, mother, grandmother and friend. Janet was preceded in death by her two brothers, Robert and Stanley Demo and is survived by her husband, Robert, son Kameron (Dina Walker) Kerlin, daughters; Kriste (Kenneth) Kerlin-Hornyak, Kelly (James “Bill”) Kerlin-Ropposch, and Koleen (Kenneth) Kerlin-Spigarelli; granddaughters, Kara (Michael) Wezner, Amy Kerlin, Kaelin Ropposch, Isabella Spigarelli, and Hadley Grace Walker-Kerlin; grandsons Keaden Hornyak, Kolter Hornyak, Tyler Spigarelli; brother Paul (Cheryl) Demo and several nieces and nephews. A memorial mass will be held at 11:00 am on Saturday, September 21, 2019, at St. Joseph Catholic Church, 12675 Center Road, Traverse City, Michigan, 49686 with Father Raymond Cotter of Christ the King officiating. The family is delighted to greet visitors at the church from 10:00 -11:00 am and suggest any memorial contributions be directed to The Father Fred Foundation, 826 Hastings Street, Traverse City, MI 49686, American Autoimmune Disease Association, 22100 Gratiot Avenue, Eastpointe, MI, 48021, or the Arthritis Foundation, 1355 Peachtree St NE Suite 600, Atlanta, GA 30309.

The family of Janet Joy Kerlin created this Life Tributes page to make it easy to share your memories.