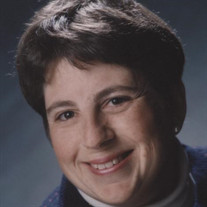 KING — Janet Lea King, of Traverse City, died January 24, 2015. She was 56. Born January 17, 1959, in Fort Worth, Texas, she was the daughter of Edna King. Janet lived in Traverse City since she was three years old, where she picked cherries as a child, worked at McDonald’s for 12 years, volunteered at Munson Hospital, and was a Cherry Festival Ambassador. She enjoyed playing bingo, working puzzles, playing mini-golf, and was a master Skip-Bo player. Her favorite past times were talking long walks at the Traverse City Commons, finding a treasure at a garage sale, and searching for Petoskey stones on the beach at Glen Haven. She had a very special relationship with her mother and the two were inseparable. They spent almost every day together enjoying various activities and sharing at least one meal a day. Janet was one of the kindest people you could ever meet. She was always thinking of what would make others happy and though she suffered many injustices in her life, she never held a grudge. She was happiest when her sisters, their husband’s, and her niece and nephew came home to visit because she loved to have company and someone to challenge her to a game of marbles. She dearly missed her brother, David, who preceded her in death 6 years ago and it gives her family peace to think of the two of them together with God. Janet was a member of Bayview Wesleyan Church in Traverse City. She was preceded in death by her father, Gene L. King and her brother, David G. King. Janet is survived by two sisters and their spouses, Gena (George) Baujan and Christine (Patrick) Stegman; nieces Katherine Stegman and Chedra King; nephews Christopher Stegman and Parker, Mason, and Tanner King and dear friend Wes Parker. Visitation will be held for an hour just prior to the service at 11:00am on Tuesday, January 27, 2015, at Bayview Wesleyan Church. Janet will be laid to rest at Solon Cemetery next to her brother, David.

The family of Janet Lea King created this Life Tributes page to make it easy to share your memories.