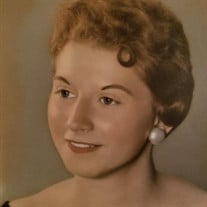 Janet Ruth (Long) Stover, 83 of Traverse City, Michigan, formerly of New Brighton, Pennsylvania, passed away on Sunday January 24, 2021, at Munson Medical center in Traverse City, Michigan, surrounded by her son and his family. Janet was born November 20, 1937 in Beaver Falls, Pennsylvania, the daughter of Andrew and Frances (Groeffler) Long of New Brighton, PA. When Janet lived in Pennsylvania, she was a member of St. Joseph Catholic Church in New Brighton, PA and previously a member of Saints Peter and Paul Parish in Beaver, PA. Janet worked at New Brighton Building and Loan/Tower Federal and later for an attorney in Beaver, PA. Janet loved music and dancing. She was a huge fan of Engelbert Humperdinck attending many of his concerts and owned all of his albums. Janet was known to be the first to the dance floor even later in her life. Janet’s most precious love was her family which includes her best friend and sister Mary Ann; they were inseparable and a great support to each other. Janet was a very caring person who made many lasting friendships throughout the years. Janet will be greatly missed by her son, Mark E Stover and daughter in law, Danette Dezelski of Traverse City, MI; her sister and brother in law, Mary Ann and James Pacitti of New Brighton, PA; her niece Michelle (Pacitti) Stockunas, nephews: Scott Pacitti, Paul Long, Ronald Long and David Long, many great nieces/nephews: including Mia and Mason Stockunas and many great friends and caretakers. Janet was preceded in death by her parents, brother and sister in law, Paul (Kenny) and Dolores Long. A private family burial will occur later this year at St. Joseph cemetery in New Brighton, PA. Arrangements are with the Reynolds Jonkhoff funeral home of Traverse City, Michigan. Please share a memory with Janet’s family by visiting her tribute page at www.reynolds-jonkhoff.com.

The family of Janet Ruth Stover created this Life Tributes page to make it easy to share your memories.