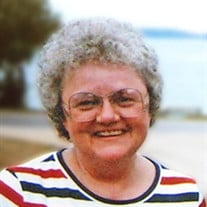 Janet Hill (Storms) Stricker left her pain behind on Tuesday, November 12, 2019 to inhabit her perfect glorified body in the place of "no more pain and no more tears”. Janet was born to Robert and Viola Storms in Norwich, CT on October 31, 1935. She graduated from Pratt Institute in New York before moving to CA to pursue her design and sewing career. She worked at Simplicity Patterns at the time she met her future husband, William “Bing” Stricker. Bing was in the Marines at Camp Pendleton. They married on January 18, 1958 in CA. They moved to Traverse City, MI to begin their married life and raise their family. Janet’s professional seamstress career started with altering wedding dresses at Bartlings in downtown Traverse City and then ran a sewing business out of the home while caring for her four children. Many loyal customers have missed her talent for several years now as Janet’s physical health declined. She also made baby quilts and hats for the hospital and emergency responders. One of her favorite pastimes was assembling puzzles, which became a full-time activity when she was no longer able to sew. She loved sharing this pastime with her children around the Thanksgiving and Christmas time. She also enjoyed crossword puzzles and word searches. She was also known for “resting her eyes" when she didn’t want to admit she was falling asleep in her chair. Janet can’t thank her special helpers enough for their loving care. Many helped her with daily needs, drove her to appointments, and ran errands for her. Thank you, Sharon & Paul Martin, for your devoted transportation services to appointments and social functions. Another special thank you to her loving neighbors, Dick & Sue Bonzelet, who were available at all times to help as needed. Janet is preceded in death by her parents Robert J. Storms and Viola (Hill) Storms; and her husband, William Henry Stricker “Bing". She is survived by her two sisters and one brother of Norwich, CT: Marge (Don) Hargreaves, Barbara (Joe) Trocki, and Robert Storms Jr; In-laws in Traverse City, MI: Elamae Loomis, Dick (Cheryl) Stricker, Rod (Jean) Stricker, and Joyce Stricker; Four children, Donna (Henry) Vietzke of Gladstone, MI, Susan (Eric) Holt of Grand Rapids, MI, Barbara Stricker of Traverse City, MI, and Jim (Brenda) Stricker of Cedar, MI; Her grandchildren: Charles (Sarah) Vietzke of Midland, MI, Caleb Holt of Grand Rapids, MI, Grace (Victor) Luce of Grand Rapids, MI, Joshua (Lisa) Holt of Greenville, MI, Kristi Holt & Isaiah Holt of Grand Rapids, MI, Tyler Stricker of Grand Rapids, MI, Luke Stricker of Midland, MI, and Jacob Stricker of Ann Arbor, MI; 8 great grandchildren: Hazel & Alice Vietzke, Gavin, Emma, & Carter Luce, Clara & James Holt, and Ellianna Holt; and many nieces & nephews in MI & CT. Funeral services will be Saturday, November 16, 2019 at 3:00 PM with a visitation for friends and family one hour before at the Reynolds-Jonkhoff Funeral Home (305 Sixth St, Traverse City, MI 49684). Pastor Jared Ingle will officiate. For those unable to attend the service in person, a live webcast will be available at www.rjfh.tv. Memorial donations can be directed to the Long Lake Fire Dept or Father Fred Foundation. Janet and her family are in the care of the Reynolds-Jonkhoff Funeral Home and Cremation Services.

Janet Hill (Storms) Stricker left her pain behind on Tuesday, November 12, 2019 to inhabit her perfect glorified body in the place of "no more pain and no more tears&#8221;. Janet was born to Robert and Viola Storms in Norwich, CT on October... View Obituary & Service Information

The family of Janet Hill Stricker created this Life Tributes page to make it easy to share your memories.

Janet Hill (Storms) Stricker left her pain behind on Tuesday,...