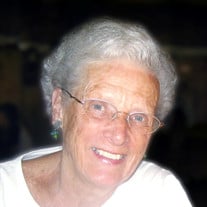 Jean Lorraine Bensley, 90, of Traverse City, passed away on April 30 at the Grand Traverse Pavilions with her children by her side. Jean was the daughter of Harry and Bertha (Stanek) Lautner and was born Sept. 28, 1923, on the family farm on Harry’s Road in Leelanau County. Jean graduated from Traverse City High School (Class of ‘41) and received a degree from Lansing Business College. Following her education she worked for the United States Army in Jackson and later as a personal secretary for John T. Parsons. Jean was the office manager for Don Orr Ski Haus and The Village Press, retiring in 1988. In 1946 Jean married Jackson Holliday Bensley and began a life of love and laughter. They bought their first house on Boughey Hill and instantly began making a lifetime of memories with their new neighbors - the Schneider, Wares and Mack families. After her husband, Jack, died she made her children and grandchildren her utmost priority. She attended every school and sporting event possible. She had a way of making each grandchild feel they were her favorite. If you knew Jean Bensley, you knew she was the very definition of a lady. Jean enjoyed entertaining her family and friends, hosting elegant holiday meals, birthday dinners, New Year’s Eve and Saint Patrick’s Day parties. She canned, made jam, baked wonderful cookies and was a tremendous cook and a gracious hostess. Her love of flowers led to beautiful gardens and a knack for floral arrangements. She knew every kind of needle there was and loved to knit, sew and crochet. She made clothing, draperies, afghans, and enjoyed cross-stitch and needle point. Jean also loved to play cards. She belonged to the same bridge club for over 60 years. Euchre was a family favorite which often led to each player wearing “lucky” hats. She and Nan Wares kept a running score of their Spite and Malice games! Jean enjoyed membership at Central United Methodist Church and was the first female trustee in the church’s history. She was a longtime member of the Child Study Club and Friendly Garden Club. Jean volunteered many hours with the Glenn Loomis PTA, Boy Scouts, Girl Scouts, Grand Traverse Ski Club and other organizations. She served as a board member for the Grand Traverse Pavilions, Grand Traverse Historical Society and was an active volunteer for The Community Living Center (BrickWays). Jean was preceded in death by her parents; her husband, Jack; and her sister, Shirley Eisenach. Jean is survived by her children, Thomas (Candy) Bensley, Barbara (Jack) Gillen and Bonnie (Jeff) Jakeway; and her grandchildren, Jeffrey Bensley, Bailey and Kelsey Bensley and Jordan, Jenna and Sara Jakeway. Jean is also survived by her sisters and brothers-in-law, Jane Linden, Dick Eisenach, Larry and Joey Bensley and Ken Sleder; her nieces and nephews, Mark, Amy, Jennifer, Jill, Joline, Kath, Dave, Jeff, Jim, Bob, Karie and Bill; and her cousin, Arlene Weitz. Visitation for Jean will be held on Friday, May 9, 2014, from 4 to 7 p.m., at the Reynolds-Jonkhoff Funeral Home. The funeral service will take place on Saturday, May 10, 2014, at Central United Methodist Church, at 2 p.m., with a visitation one hour prior. Memorial contributions may be directed to Central United Methodist Church, Preserve Hickory or BrickWays.

Jean Lorraine Bensley, 90, of Traverse City, passed away on April 30 at the Grand Traverse Pavilions with her children by her side. Jean was the daughter of Harry and Bertha (Stanek) Lautner and was born Sept. 28, 1923, on the family farm on... View Obituary & Service Information

The family of Jean Lorraine Bensley created this Life Tributes page to make it easy to share your memories.

Jean Lorraine Bensley, 90, of Traverse City, passed away on April...