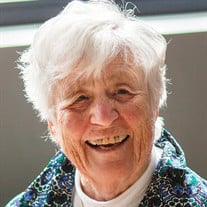 Jean S. Cornwell, 98, of Traverse City, passed away peacefully May 24, 2017, with the comforting reassurance of family members who felt blessed by her long and loving life. Jean was born on April 28, 1919, in Syracuse, New York, the daughter of Raymond and Grace Gladys (Haviland) Holzworth. She was raised in Syracuse, was graduated from Northfield School for Girls in Northfield, Massachusetts, continued her education through her graduation from Syracuse University, and then attended the Yale School of Nursing. On March 19, 1943, Jean married F. Gordon Cornwell at her family home in Syracuse. She and Gordon then lived in Indian Lake Shores, Rhode Island, and Hamden and New Haven, Connecticut. In 1947, Gordon accepted a position as architect with the Parsons Corporation, which precipitated their move to Traverse City. Living in Traverse City’s Central neighborhood and then on the base of the Peninsula, Jean and Gordon raised their four children, “Gordy, Stevie, Nancy and Bobby.” The Cornwells were very active and constructive members of the Traverse City community. Jean was a dedicated and long time member of First Congregational Church from its days on Washington Street to its “new” church designed by Gordon, located on Center Road. Jean was a charter member of the Traverse Area Symphony, of the Grand Traverse Ski Club, and of the Grand Traverse Yacht Club; a member of the Grand Traverse Musicale and of the Friendly Garden Club; and she volunteered as a “Pink Lady” at Munson Medical Center for over 30 years. Throughout her entire adult life Jean remained lovingly involved in and attentive to the lives of all of her children, grandchildren, and great-grandchildren who will miss her so. Jean is survived by her children, Gordon H. (Suzanne) Cornwell, Steven D. (Jan) Cornwell, Nancy C. (L. Kent) Walton, and Robert C. (Allyn Kay) Cornwell; her adoring grandchildren, Stacey (Andy) Hasse, Wes (Sheri) Cornwell, Sarah (Charlie) Hubbell, Megan (Jeremy) O’Grady, Andy (Jessica) Cornwell, Stephanie (Amanda) Walton, Abby (Sam) Porter, Lindsay (Mike) Annelin, Mollie (Chad) Mather, Myles (Eugenia) Cornwell, and Betsy Cornwell; and her 21 great-grandchildren. She was preceded in death by Gordon, her loving husband of 68 years, by her parents, and by her brother Robert (Lois Ann) Holzworth. Jean's life will be celebrated at 10:00 AM, Saturday, June 10, 2017, in the Chapel at First Congregational Church, 6105 Center Road, Traverse City. Jean’s cremated remains then will be buried next to those of her beloved husband, Gordon, in the Garden of Remembrance. A visitation will follow in the Church Fireside Room. Memorial contributions in Jean’s memory may be directed to the Grand Traverse Musicale Scholarship Fund, (P.O. Box 31, Williamsburg, MI 49690), or to Munson Healthcare Regional Foundation (1150 Medical Campus Drive, Traverse City, MI 49684).

Jean S. Cornwell, 98, of Traverse City, passed away peacefully May 24, 2017, with the comforting reassurance of family members who felt blessed by her long and loving life. Jean was born on April 28, 1919, in Syracuse, New York, the daughter... View Obituary & Service Information

The family of Jean S. Cornwell created this Life Tributes page to make it easy to share your memories.