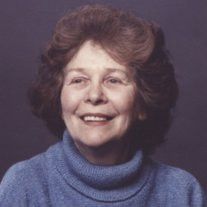 Traverse City – Jean Demaray, 91, of Old Mission Peninsula passed away on October 8, 2013 at home, surrounded by her family. Jean was born on September 14, 1922 in Cheboygan to the late Ted and Nellie (Wollangur) Redmond. Jean graduated high school at the age of 15, and went straight to work, helping to raise and support her younger brothers. She was working at a soda shop in Cheboygan when she met a Michigan State Police officer named James Henry Demaray. James and Jean married in 1942. Together they raised a family of six children in Cheboygan. Jean was content to stay home with her children, and her first love was raising them and being with them. When James passed away after less than 20 years of marriage, Jean had to leave her job as a full-time mom, and go to work at an insurance company as a full-time agent. She worked in the business for over 20 years, and was one of the first female agents, as well as one of two agents to write the first million dollar policy in the company’s history. After retirement, Jean loved to spend her time reading, dining out with friends and family, and cheering on the Detroit Tigers. She had a passion for collecting and selling antiques. She loved spending time with her children and grandchildren, and frequently called to say, “How about lunch?” She called each of her grandchildren “Honey Bunch”, and made each one feel special and important. And she also loved a good game of Scrabble with her son, Dan, even though he almost always won. Jean is survived by her children: David (Patricia) Demaray of Diamond Springs, CA; Michael (Sannie) Demaray of Lighthouse Point, FL; Patricia (Tim) Kelley of Vermilion, OH; Mary (Jack) Worrell of Interlochen, MI; Nancy (George) Dunn of Morganton, NC; and Daniel Demaray of Traverse City, MI. She is survived by all her “Honey Bunches”, numbering around 51 grandchildren and great-grandchildren. She is also survived by her brother, Donald Redmond of Wasilla, AK, and many nieces, nephews, and cousins. She is preceded in death by her husband, James, her brothers, Thomas and Richard, and her son-in-law, John R. Haberlein. A time of celebration of Jean’s life will take place on Saturday, October 12, 2013 from 3 to 6 pm at the Reynolds Jonkhoff Funeral Home. Memorial contributions in memory of Jean may be directed to Hospice of Michigan, or a charity of your choice.

Traverse City &#8211; Jean Demaray, 91, of Old Mission Peninsula passed away on October 8, 2013 at home, surrounded by her family. Jean was born on September 14, 1922 in Cheboygan to the late Ted and Nellie (Wollangur) Redmond. Jean graduated... View Obituary & Service Information

The family of Jean Demaray created this Life Tributes page to make it easy to share your memories.