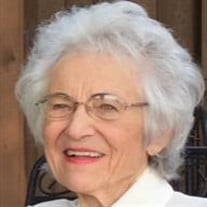 Jean Joy (Ricky) Ross, 93, of Traverse City and Northport, passed away on June 16, 2020. Ricky was born on April 8, 1927 in Milwaukee, WI to the late Frederick (Dotten) and Irma (Gagee) Reichmann. She grew up in Milwaukee and graduated from Bay View High School. After high school Ricky attended Carroll College (now Carroll University) in Waukesha, WI and graduated with a B.S. in Medical Technology. She worked in the medical profession until June, 1948 when she married her high school sweetheart and love of her life, Ray. The couple relocated to Purdue University in West Lafayette, IN where Ricky proof read and copy edited Ray’s Ph.D. dissertation and gave birth to her first born, Mark. They then moved to Columbus, OH where Ricky gave birth to a second son, Scott. They finally settled in Birmingham, MI where they raised their two children. During their time in the Detroit area Ricky served as a medical volunteer and eventually became President of the Visiting Nurses Association of Beaumont Hospital in Royal Oak. Together she and Ray enjoyed working together professionally with Ricky being heavily involved as an independent copy editor at Prentice Hall Publishing for a series of college textbooks Ray continued to write. They then retired to Traverse City to continue writing while spending summers at the family’s treasured Paradesia Point property. They had an incredibly unique and collaborative partnership that included love, family and business. Ricky, having lived through the Great Depression and having survived a world war is truly a member of the Greatest Generation. She imparted wisdom and guidance to many in future generations. Ricky is preceded in death by her husband Ray. She is survived by her two children, Mark (Kelli Stepka) Ross of Northport and Scott (Dawn Carter) Ross of Truckee, CA, and grandkids Pine Kopka-Ross and Shawnn Schaub. A memorial celebration will be held at a later date. In lieu of flowers, memorial contributions may be directed to the Leelanau Conservancy, the Dennos Museum at NMC, the Northport Highlands Senior Living Facility or the VFW. Ricky and her family are in the care of the Reynolds-Jonkhoff Funeral Home and Cremation Services.

Jean Joy (Ricky) Ross, 93, of Traverse City and Northport, passed away on June 16, 2020. Ricky was born on April 8, 1927 in Milwaukee, WI to the late Frederick (Dotten) and Irma (Gagee) Reichmann. She grew up in Milwaukee and graduated from... View Obituary & Service Information

The family of Jean Joy Ross created this Life Tributes page to make it easy to share your memories.