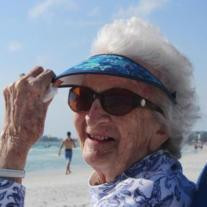 Elk Lake - Jeanne V. Maas, 94, of Elk Lake passed away December 11, 2012 at Orchard Creek. Affectionately known as “ Muzzy”, Jeanne was born on December 5, 1918 in Niles to Charles and Minnie (Kimmick) Visel. Jeanne graduated from Niles High School in 1937. She earned her Bachelor of Science degree in Dietary Science at Michigan State College in the spring of 1941. WWII was underway and she joined the Army Medical Corps as a Second Lieutenant. She arrived in England on D Day and began her work at the 7th General Hospital. After the war in Europe ended, she sailed home aboard the Queen Mary and married the love of her life, Albert (Al) W. Maas. They were united in holy matrimony on March 30, 1946 and shared 62 years together before he passed away on July 18, 2008. Dying on Al’s birthday, Jeanne's final gift to him was to join him in Heaven. Jeanne and Al raised three daughters. In 1966, the family began building their cottage on Elk Lake. Aptly named "Reely Livin", Jeanne treasured every minute spent there with her family and friends. She enjoyed swimming, boating, and vinting cherry wine from local tart cherries. She also enjoyed the company of many family dogs who brought her great joy. Jeanne and Al spent the winter months in Siesta Key, FL where they had many good friends and wonderful times. Jeanne and Al were members of Kirk in the Hills in Bloomfield Hills, and attended the Elk Rapids Presbyterian Church and the Pine Shores Presbyterian Church in Sarasota regularly. Following Al's death, Jeanne became very active at Hope Village. She had an amazing zest for life and her enthusiasm was contagious. She will be greatly missed by all who knew her. Jeanne is survived by her daughters Marge (Allan) Whittemore of Farmington Hills, Betsy (Roy) Nichols of Traverse City, Debbie (Steve) Francis of Elk Rapids, granddaughters Laura (Mike) Howe, Christine (Todd) Elsenheimer, great grandchildren Aiden, Avery, and Jackson, niece Mary Margaret (Bill) Leonard of Grosse Pointe Farms and Whittemore grandchildren, Eileen, Nancy, Janine and Todd and five great grandchildren. Jeanne was also preceded in death by her sisters Margaret, Ruth, and Anita. A memorial service is planned for Saturday, December 22, 2012 at 1pm at Kirk in the Hills in Bloomfield Hills (1340 Long Lake Road). The family plans to have a summer memorial and gathering at the Elk Lake cottage. Memorial contributions in memory of Jeanne may be directed to the ALS Foundation, Kirk in the Hills or to AC Paw. The family would like to thank the care givers at Munson Medical Center, Orchard Creek, Senior Helpers, and especially the loving staff at Hope Village for their extraordinary compassion.

The family of Jeanne V. Maas created this Life Tributes page to make it easy to share your memories.