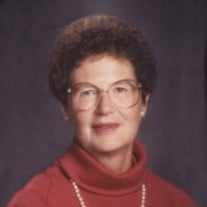 Jeanne L. Murchie, 85, of Traverse City passed away Wednesday, February 6, 2013 surrounded by her children. Born August 2, 1927 in Grand Rapids, Mi., she was the daughter of Theodore and Velma (Sayles) Wright. A longtime resident of Traverse City, she graduated from Traverse City Central High School in the class of 1945. Jeanne married Jack E. Murchie on September 6, 1947 sharing over 53 years together until his passing in 2001. Shortly after marriage, they made several career moves to Grand Rapids, Mi., Holland, Mi. and Sturgis, Mi. before returning to Traverse City where they raised their family and spent the rest of their years together. While in Grand Rapids, she was very instrumental in establishing and supporting St. Andrews Episcopal Church and later transferred that support to Grace Episcopal Church where she was a member of the choir, the altar guild and the organist. Over the course of her career as a medical secretary, Jeanne worked at Munson Medical Center and the offices of Donald G. Pike, M.D., William J. McCool, M.D. and Thirlby Clinic, P.C. until her retirement in 1985. Jeanne had a lifelong love of music. After attending the Interlochen Music Camp, she expressed that love through her voice and keyboards both personally and professionally and instilled that joy in the rest of her family. Jeanne had a passion for cooking and was delighted to pass along that interest and skill to her children. Her meals were always a treat and holidays were a gourmet occasion for all. Jeanne thrived on being outside through sailing, swimming, sitting on the beach and playing golf. She was also an avid University of Michigan sports fan and especially enjoyed watching basketball. Jeanne is survived by her son, Kim (Christine) Murchie of Sebring, Fl., daughters Ann Reichert and Susan Murchie of Traverse City, Mi., six grandchildren, Sharon Murchie of Haslett, Mi., Justin Murchie and Stephanie (Brandon) Cissell of Louisville, Ky., Brandon (Kayla) Murchie of Moore, Ok., Scott Reichert of Danville, Il., Mark (Sophia) Reichert of Bartlett, Il. and five great grandchildren. She is also survived by her sister, Margery (Lornie) Kerr of Traverse City, Mi. and many nieces and nephews. Visitation will be held from 4:00 PM to 6:00 PM on Sunday, February 10, 2013 at Reynolds-Jonkhoff Funeral Home. Funeral services will take place at 11:00 AM on Monday, February 11, 2013 at Grace Episcopal Church with the Rev. Daniel P. Richards officiating. Grave-side committal will be held after the service at 3:00 PM in Oakwood Cemetery. Memorial contributions may be directed to Grace Episcopal Church, Traverse Health Clinic or the charity of your choice.

Jeanne L. Murchie, 85, of Traverse City passed away Wednesday, February 6, 2013 surrounded by her children. Born August 2, 1927 in Grand Rapids, Mi., she was the daughter of Theodore and Velma (Sayles) Wright. A longtime resident of Traverse... View Obituary & Service Information

The family of Jeanne L. Murchie created this Life Tributes page to make it easy to share your memories.