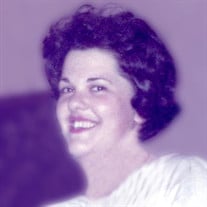 Jeannette Marie Dowd, 75, of Traverse City passed away, Thursday, September 07, 2017 after an extended stay at the Grand Traverse Pavilions. Jeannette was born on Friday, August 14, 1942 to Aubrey and Louella (Bullion) Carmien in Traverse City, MI. She attended Traverse City High School and worked as a beautician. She owned her own salon, Jeannette’s Beauty Nook, for many years and retired in 1997. Jeannette married the love of her life, Ronald Dowd, and they shared many wonderful years together. Ron was tragically killed in a hunting accident, however, Jeannette never dated after Ron’s death because she had had the perfect marriage and no one would ever measure up to Ron. She and Ron owned Dowd’s Duck Lake Kennels, which she continued to operate after Ron’s death. She filled her life with her family and enjoyed reading, crocheting, crossword puzzles and watching the Pistons and the Tigers. She spent time in Frankfort watching the boats, camping with her grandchildren and going to the Upper Peninsula to go smelt dipping. She was a huge fan of Elvis, with her favorite songs Amazing Grace and Suspicious Minds. She also had two faithful companions in her cats, Cagney and Lacey. She is survived by her daughter Vanja (Gary) Griffin; sister Linda (Donald) Weathers; brothers Aubrey ‘Butch’ (Kathleen) Carmien and Albert ‘Dick’ (Vera May) Carmien; grandson John (Chelsie) Griffin; great grandchildren Brooklyn Griffin, Harper Griffin and Paisley Griffin; and many nieces and nephews. She was preceded in death by her husband Ronald Dowd; parents Aubrey and Louella (Bullion) Carmien; and father and mother in-law George and Leona Dowd. A memorial service will be held on Friday, September 15, 2017 at 3 p.m. at the Reynolds-Jonkhoff Funeral Home, with visitation beginning at 2 p.m. Those wishing an expression of sympathy may direct contributions to AC Paws, P.O. Box 94, Acme, MI 49610 or the Cherryland Humane Society, 1750 Ahlberg Road, Traverse City, MI 49686.

The family of Jeannette Marie Dowd created this Life Tributes page to make it easy to share your memories.