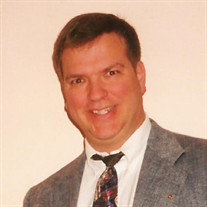 Jeffrey Whiting, 61, died May 16, 2021 from complications of COVID-19. He was born on April 8, 1960 to Richard and Sandie (Champney) Whiting in Traverse City. Jeff was the third of four brothers: Carter, Kevin and Mark. Close in age, they grew up as friends as well as brothers. Jeff graduated from Traverse City Central in 1979. He played sports throughout his junior and senior high years. Football, basketball and track are sports he enjoyed. His athletic ability put him among the best. His achievements are admirable. Following high school, Jeff attended Hope College where he played football for two years. A growing desire for something new led Jeff to the beautiful mountains of Montana and to Montana State University. Despite being in a new state, he quickly made many new and lifelong friends. He graduated with a bachelor's degree in finance. Finding himself back in Michigan, Jeff married Lisa (DeLano) in 1988. At the same time, he began his career in real estate appraisal. Learning from his father, he eventually took over the family business, R. Whiting Associates. He became a reputable appraiser in Northern Michigan. Jeff and Lisa welcomed five children: Leighanna, Cassie, Nicholas, Erica and George. Jeff adored his children and was proud of their many accomplishments. He spent many years coaching his children in their youth. He was also an avid fan at any athletic or extra-curricular activity throughout their lives. He loved supporting their events even if it meant driving across the state. Through his coaching, Jeff made an impact on many young athletes. He was a natural coach/mentor. Besides coaching, Jeff enjoyed skiing and being a member of the National Ski Patrol. He spent many summers camping with family and extended family. Jeff was an avid golfer. Using his sense of humor, he brought many laughs and smiles to those around him. He was preceded in death by his parents and grandparents. Surviving Jeff are his wife, children, brothers and their families and many extended family members. Visitation will take place from 6-8pm, Thursday, May 20, 2021 at the Reynolds-Jonkhoff Funeral Home in Traverse City. Memorial contributions can be made to a charity of your choice. Reynolds-Jonkhoff Funeral Home and Cremation Services is caring for Jeff and his family. You may view his tribute page at www.reynolds-jonkhoff.com.

Jeffrey Whiting, 61, died May 16, 2021 from complications of COVID-19. He was born on April 8, 1960 to Richard and Sandie (Champney) Whiting in Traverse City. Jeff was the third of four brothers: Carter, Kevin and Mark. Close in age, they grew... View Obituary & Service Information

The family of Jeffrey Darin Whiting created this Life Tributes page to make it easy to share your memories.