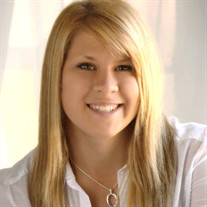 Vacaville, CA - Jennifer Louise Stevenson of Vacaville, California unexpectedly and tragically passed away Tuesday, June 5, 2018. She was 26 years old. Jennifer was born April 12, 1992 to Mark Stevenson and Molly (Poole) Gallop in San Diego, California. She moved to Traverse City with her family and attended Traverse City West High School, from which she graduated in 2010. She then enlisted in the United States Navy and served as Military Police at the Kitsap Naval Base in Silverdale, Washington. After being honorably discharged from the Navy, she attended the University of Phoenix and earned her Bachelor of Science degree in Criminal Justice. As a result of her stellar performance, she was nominated for an internship with the Federal Bureau of Investigation (FBI). She was currently working as an intern with the Sacramento Coroner’s Office. She had a remarkable unassuming confidence about her and was meticulously prepared for her time in the military, her private sector jobs, internship, and her schooling. She took copious notes and was always prepared to provide a thoughtful, articulate answer to any question asked of her. Her instructors noted that she was a joy to instruct because of her work ethic and commitment to her studies. She ultimately aimed to obtain a position with the FBI, which she was well on her way to achieving. Jennifer was preceded in death by her paternal grandfather John Stevenson and maternal grandfather William ‘Bill’ Quine. She is survived by her mother Molly (Ron) Gallop; father Mark (Jeannie) Stevenson; sister Jessica (Ben) Chipman; brothers Justin Stevenson, Jordan Stevenson and Jacob Stevenson; step-sister Josie Gluesing; step-brother Logan Gluesing; paternal grandmother Lynne Stevenson, maternal grandmother Margaret ‘Peggy’ Quine; maternal grandfather Roland (Carol) Poole; and special nephew Deeken Chipman. Jennifer’s family will hold visitation hours on Friday, June 15, 2018 from 6 p.m to 8 p.m. at the Reynolds-Jonkhoff Funeral Home, and will hold a Celebration of Life ceremony on Saturday, June 16, 2018, 11 a.m., at the Blue Bridge Event Center. They will also hold additional visitation hours prior to the ceremony, which will begin at 10 a.m. The service on Saturday will be streamed live at www.rjfh.tv. Those who wish to express sympathy are encouraged to contribute to the Jennifer Stevenson Memorial Fund, c/o Traverse City State Bank, 333 W Grandview Pkwy, Traverse City, MI 49684. As Jennifer deeply desired to have children of her own, all proceeds will be set aside to assist with the education and future success of Jennifer’s nephew, Deeken Chipman.

The family of Jennifer Louise Stevenson created this Life Tributes page to make it easy to share your memories.