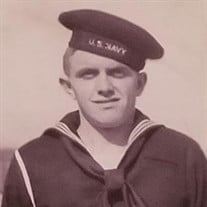 Jennings “Jay” Bright, 93, of Traverse City passed away at the Jubilee House in Clarksville, TN. Jay was born on October 12, 1926 in Maple City, MI to the late Walter and Goldie (Zigler) Bright. He married the love of his life, Catherine Gokey on July 22, 1950 in Maple City. He proudly served his country in the U.S. Navy during World War II. Jay and Catherine owned and operated the Shorelane Motel in Acme. Jay had been employed with Parsons Manufacturing, where he worked with fiberglass making helicopter blades. His work with fiberglass later led him to work with Murray’s Boats and Motors, retiring in 1995 after over 30 years of service. He lived in the Traverse City area his whole life, but he loved spending the winters in Largo and Clearwater, Fl. He enjoyed deer hunting, snowmobiling and was a Detroit Tigers Fan. Jay was proud of the fact that he was able to do the “Honor Flight”, with his daughter-in-law, Peggy. Jay is survived by his wife of 69 years, Catherine, a son and two daughters; Allen (Peggy) Bright, Jacklyn (Craig) Fisher and Pamela (Steve) Schusler. Also surviving are grandchildren; Ryan, Jake, Justin, Amber, Shawn, Shannon and Natasha and 12 great-grandchildren. Jay also leaves four sisters; Wanda (Kenneth) Stormer, Pauline (Donald) Stormer, Bertha Waassnaar and Leah (Bobby) Erickson as well as many nieces and nephews. He was preceded in death by three brothers; Carl Bright, Edward Bright and Wayne Bright. Friends are welcome to visit with Jay’s family from 6:00 to 8:00 p.m. on Wednesday, November 13, 2019 at the Reynolds-Jonkhoff Funeral Home, 305 Sixth St., Traverse City, MI 49684. A funeral service honoring Jay, will take place at 11:00 a.m., with visitation one-hour prior, on Thursday, November 14, 2019 at the Reynolds-Jonkhoff Funeral Home. Pastor Don Meiner will officiate. Military Honors will be conducted under the auspices of the U.S. Navy, Cherryland V.F.W. Post 2780 and American Legion Post 35. Please feel free to share your thoughts and memories with Jay’s family at his tribute page at www.reynolds-jonkhoff.com. The family is being cared for by the Reynolds-Jonkhoff Funeral Home and Cremation Services.

Jennings &#8220;Jay&#8221; Bright, 93, of Traverse City passed away at the Jubilee House in Clarksville, TN. Jay was born on October 12, 1926 in Maple City, MI to the late Walter and Goldie (Zigler) Bright. He married the love of his life, Catherine... View Obituary & Service Information

The family of Jennings "Jay" Bright created this Life Tributes page to make it easy to share your memories.

Jennings “Jay” Bright, 93, of Traverse City passed away at the...